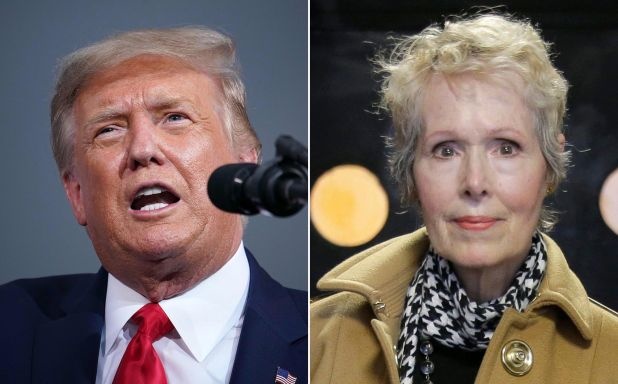 The Justice Department takes over Donald Trump’s defense in a defamation lawsuit by author E. Jean Carroll, who says Trump raped her in a Manhattan department store in the 1990s.

Led by Trump political appointee William Barr, the Justice Department replaced Trump’s private legal team with Government lawyers. It argued in court papers that Trump was acting in his official capacity as President when he denied ever knowing Carroll.

The step means that payment for Trump’s defense will come from taxpayers rather than Trump, whose re-election campaign is reportedly struggling with a shortage of money.

The Justice Department may also try to throw out Carroll’s lawsuit, arguing that a sitting President cannot be a defendant.

Legal experts says the step has rarely, if ever, been taken to protect a President, especially for actions before he assumed office.

Some current and former Justice Department lawyers said they were stunned at the intervention.

“Trump Hurls Bill Barr at Me”

A state judge ruled last month that Trump might be deposed in the case before the November 3 vote. Carroll’s lawyers have requested a DNA sample to test against genetic material on the dress Carroll was wearing at the time of the alleged rape.

Ms. Carroll’s lawyer said in a statement issued Tuesday evening that the Justice Department’s move to intervene in the case was a “shocking” attempt to bring the resources of the United States government to bear on a private legal matter.

Carroll’s lawyer Roberta Kaplan said, “Trump’s effort to wield the power of the U.S. government to evade responsibility for his private misconduct is without precedent, and shows even more starkly how far he is willing to go to prevent the truth from coming out.”

TRUMP HURLS BILL BARR AT ME.

Just when @realDonaldTrump is required to produce documents and DNA in discovery, he sics the DOJ on us.

My attorney, @kaplanrobbie, and I are happy to TAKE THEM ALL ON! @realDonaldTrump https://t.co/rAmKnqpo5s

Carroll is one of almost 20 women who have said Trump sexually assaulted or harassed them.

A former columnist for Elle magazine, the author wrote in her book, published in June 2019, that Trump raped her in the dressing room of the Bergdorf Goodman department store in late 1995 or early 1996.

She filed the lawsuit in November over Trump’s comments in a June interview that he could not have raped her because she was “not my type”. Trump also issued an official statement that Carroll was lying.

Trump said he never met Carroll; however, a photograph showed them at a party in 1987 alongside Carroll’s former husband. Trump said the picture was misleading.

Trump’s lawyers have sought dismissal of the lawsuit by claiming immunity for a sitting President.

But courts have ruled, including over a subpoena for Trump’s tax returns by New York prosecutors, that he is not immune from civil lawsuits in state courts.