TrumpWatch, Day 1,349: Biden “Wins” By Disqualification as Trump Denigrates Election and Calls on White Supremacist Militias to “Stand By” 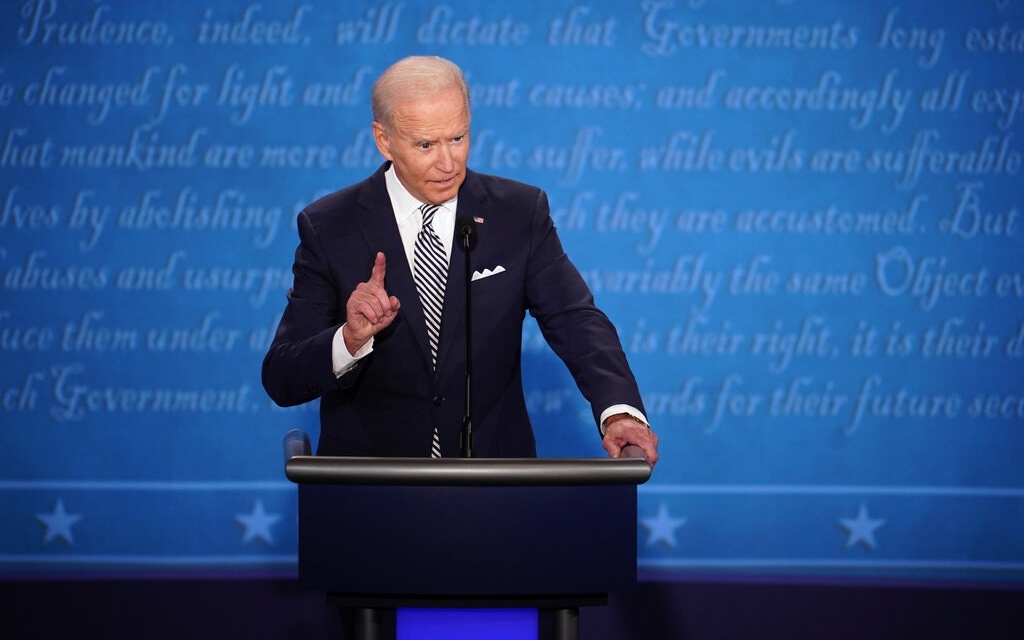 Democratic nominee Joe Biden “wins” by disqualification in an ugly, disjointed debate marked by Donald Trump’s interruptions, denigration of the US elections, and call on white supremacist militias to “stand by” for action.

But his attempt at a measured, firm presentation on issues was disrupted from the start by Trump’s frequent, diversionary interruptions.

Within minutes, Trump was not only trying to scuttle Biden’s explanation of an expanded ObamaCare, but was talking over the attempt of Fox News’s Chris Wallace attempt to ask a question about Trump’s alternative.

Wallace was forced into the reminder, “Mr. President, I am the moderator.”

Trump barreled on, “I guess I’m debating you, not him [Biden]. I’m not surprised.”

Biden struggled to be heard at times. He was able, with Trump offering no substantive response in his rambling replies, to drive home the point of more than 20 million Americans losing coverage if the Affordable Care Act is dismantled.

He has no plan for healthcare….This man doesn’t know what he is talking about.

Still, pushed by Trump’s barracking, Biden was frustrated and pushed into his own jibes, “It’s hard to get a word in with this clown.”

At one point, he had to check a shouting Trump, “Will you shut up, man?….This is so unpresidential.”

Wallace unsuccessfully tried to tamp down Trump’s disruptions, “I think that the country would be better served if we allowed both people to speak with fewer interruptions. I’m appealing to you, sir, to do that.”

Scowling, Trump pointed at Biden, “And him, too.”

Coronavirus: Biden Call to Save Lives, Trump Dismissal of Experts

On Coronavirus, Biden started with the toll of more than 205,000 dead and more than 7 million cases to put the onus on Trump’s mismanagement. Reworking Trump’s dismissal of the pandemic, “It is what it is”, Biden summarized, “It is what it is because you are who you are. That’s why it is.”

If we just wore masks between now — and social distanced — between now and January, we would probably save up to 100,000 lives.

Trump relied on his standard misinformation and falsehoods, proclaiming “millions” would have died if he was not in the White House and — contradicting his medical and public health advisors — insisting that a vaccine will soon be widely available.

Wallace and Biden noted that the Government’s top medical officials have said that distribution of the vaccine, even if proven by the end of the year, will not be until mid- to late 2021.

Trump repeated his declarations that the experts are “mistaken” and implicitly accused them of trying to undermine him, “It is a very political thing….I disagree with [them].”

In other areas, Trump maintained that his stripping of fuel efficiency standards will not increase pollution. He responded to a question on climate change with the falsehood, “We’re planting a billion trees.”

Trump lied that his political advisor Kellyanne Conway had not hailed unrest as valuable for the Trump campaign, even though she issued the statement on national television. He lied that the Portland, Oregon sheriff supports him.

Concerned that his claims might be checked, Trump tried to pre-empt any scrutiny, telling Biden, “They give you good press. They give me bad press. That’s just the way it is, unfortunately. I don’t care.”

Uplift of Militias, Denigration of Election

But Trump may have overstepped in his headline moment. Prompted by Biden and Wallace to condemn white supremacy and right-wing militias, Trump balked.

Trump finally replied, “Sure”, when Wallace asked if he would be willing to denounce the movements. He asked the two men to name a group they would like him to denounce.

Biden named the Proud Boys, a group of armed men who have marched through towns and cities — including in Portland, Oregon last weekend.

Trump issued the call, “Proud Boys? Stand back and stand by. Somebody’s got to do something about ‘Antifa’ and the Left.”

In contrast to that backing of the militia, Trump ran down the November 3 election and continued to hold out the possibility that he might not accept the outcome.

He repeated his false claims about mail-in voting, even as Biden noted that FBI Director Christopher Wray said last week that there is no evidence of widespread fraud.

I’m urging supporters to go into the polls and watch very carefully. If it’s a fair election, I am 100% on board. But if I see tens of thousands of ballots being manipulated, I can’t go along with that.

Biden countered with the call to uphold the ballot and the democratic process:

This is all about trying to dissuade people from voting, because he is trying to scare people into thinking that it’s not going to be legitimate. Show up and vote. You will determine the outcome of the election. Vote, vote, vote.

The Democratic nominee, “He can’t stay in power. It won’t happen.”

EA on BBC and talkRADIO: Will Trump’s Tax Troubles Affect the Election?

Trump tried to brush off the exposure, including his business loss of hundreds of millions of dollars. He insisted, without evidence, that he had paid “millions of dollars” in 2016 and 2017 and again refused to release his tax returns.

To regain the offensive, he attacked Biden’s late son Beau, who served in Iraq and died from brain cancer in 2015.

Biden alluded to his son’s military service in noting Trump’s derogation of troops — including the slain — as “losers” and “suckers”. Trump pivoted to an attack on Biden’s other son, “I don’t know Beau. I know Hunter,” ridiculing his business deals and struggles with drug addiction.

With a non-stop Trump interjection trying to block any reply, Biden finally got in the statement, “My son did nothing wrong.”

And, answering a question on race, he was able to lift the debate if only for a moment: “It’s about equity and equality. It’s about decency. It’s about the Constitution. And we have never walked away from equity for everyone, equality for all of America.”

In contrast, Trump said discussion of racial sensitivity, including the 1619 Project, is “a radical revolution that was taking place in our military, in our schools, all over the place”.