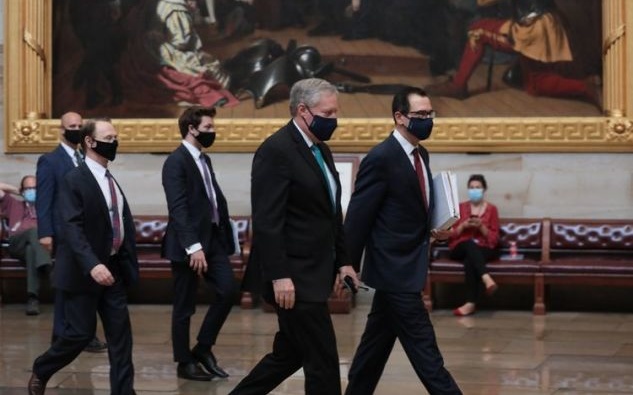 More than three hours of talks yield no progress on a Coronavirus relief package, stranding more than 20 million Americans without unemployment benefits.

The latest talks were held on Thursday in the office of House Speaker Nancy Pelosi. She described a “consequential meeting” where “we could see the difference in values that we bring to the table”. She summarized, “I feel optimistic that there is a light at the end of the tunnel, but how long that tunnel is remains to be seen.”

White House Chief of Staff Mark Meadows said after the session, which included Treasury Secretary Steven Mnuchin and Senate Minority Leader Chuck Schumer, “We’re still a considerable amount apart….We continue to be trillions of dollars apart in terms of what Democrats and Republicans hopefully will ultimately compromise on.”

Mnuchin added, “If the basis is getting an overall deal done, there would have to be significant compromises on some big issues tomorrow.”

The $600/week unemployment benefit expired last Friday. House Democrats, who have passed the $3 trillion HEROES Act, want to extend it to the end of the year. But the White House and leading Senate Republicans are proposing a reduction to $200/week, claiming that this will make the unemployed want to return to work.

The White House and its allies also opposed almost $1 trillion to states and cities whose budgets have been ravaged by the pandemic. The Democrats object to exemptions for businesses from liability over Coronavirus cases, and to money for schools to fully reopen in compliance with Donald Trump’s demand, setting aside the concerns of teachers, school administrators, and medical and public health experts.

Democrats also want funding support for the US Postal Service, including for election security and mail-in voting.

The White House is refusing, amid Donald Trump’s criticism of the Postal Service and false declarations that postal votes are fraudulent.

Senate Minority Leader Schumer said he had a “heated discussion” with Postmaster General Louis DeJoy, a major donor to Trump’s campaign, who is presiding over severe cutbacks to the Service. Schumer said DeJoy then ignored multiple phone calls.

A White House Walkout on Friday?

On Thursday, the Labor Department reported another 1.8 million unemployment applications, the 20th straight week with more than a million. About 56 million American have filed applications since mid-March.

The Department’s job creation report on Friday is expected to show weaker numbers than in May, when 2.7 million jobs were recovered, and June’s 4.8 million, because of the resurgence of Coronavirus across the US.

Trump, who has little presence in the talks, repeated his declaration that he will bypass the Constitution and issue executive to forestall evictions, suspend payroll tax collection, and provide extra unemployment aid and student loan relief.

Only Congress can appropriate funds. A White House official claimed Trump can use unspent money provided in the last $3 trillion Coronavirus measure, but Democrats said this would be illegal and insufficient.

On a visit to Ohio, Trump then tried to divert headlines with the claim that Democratic Presidential nominee Joe Biden, a lifelong practicing Catholic, is “against God”.

White House officials have set an informal deadline of Friday, when Congress is scheduled to go into autumn recess, for an agreement.

But Senate Majority Mitch McConnell, while distancing himself from the negotiations, has said that the chamber will convene next week.

The White House’s Meadows said yesterday, “Is Friday a drop-dead date? No. But my optimism continues to diminish the closer we get to Friday and certainly falls off the cliff exponentially after Friday.”

Treasury Secretary Mnuchin waved the threat of an executive order:

If we can reach a compromise on these big issues, I think everything else will fall into place. If we can’t reach an agreement on these big issues, then I don’t see us coming to an overall deal and then we’ll have to look at the president taking actions under his executive authority.