TrumpWatch, Day 1,319: Trump Stokes Violence and Says Only 9,000 US Deaths from Coronavirus 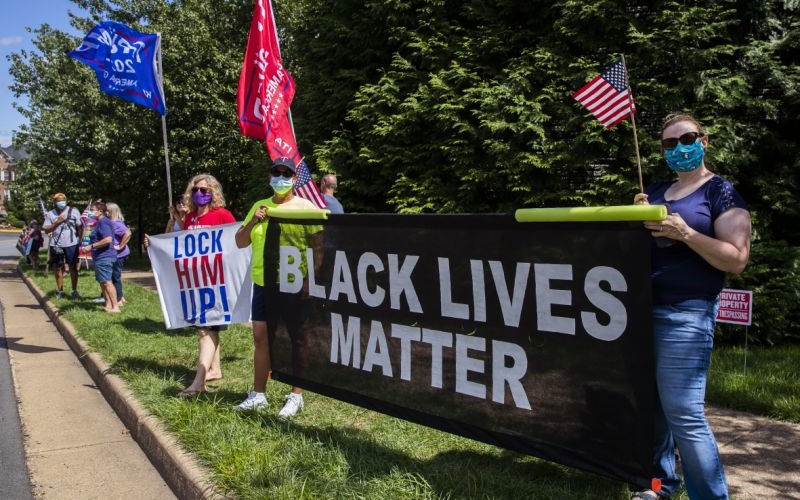 In a Twitter spree on Sunday, Donald Trump retweets a conspiracy theory that there have been only 9,000 deaths in the US from Coronavirus.

Pursuing his main re-election tactic of a social and cultural war, Trump also stoked violence with calls for his supporters — who have included armed right-wing militia — to come out in cities such as Portland, Oregon.

The calls came after Tuesday’s killing of two demonstrators in Kenosha, Wisconsin by a militia member, and Saturday’s death of a member of the Patriot Prayer militia amid clashes in Portland.

In just over two hours on Sunday morning, Trump tweeted or retweeted 89 messages.

Among them was the assertion from a supporter of QAnon, the conspiracy theorists who claim that Satanic paedophiles and a “Deep State” cabal are trying to remove Trump from office. The tweet claimed the 9,000 death toll from Coronavirus because the large majority of victims had health issues and were elderly.

The assertion distorts data, on the website of the Centers for Disease Control and Prevention, that 6% of Covid-19 victims have only Coronavirus on their death certificates. Other patients had an average of 2.6 conditions, “comorbidities”, such as heart disease.
Coronavirus is still the proximate and primary cause of death, but the data define the vulnerabilities of those most at risk.

But the hard-right attack site Gateway Pundit attempted to twist the finding to minimize the virus and assail the Government’s top medical experts: “So get this straight — based on the recommendation of doctors [Anthony] Fauci and [Deborah] Birx the US shut down the entire economy based on 9,000 American deaths to the China coronavirus.”

Trump’s advisor Jenna Ellis promoted the disinformation in a tweet, which was then circulated by Trump.

The QAnon message retweeted by Trump was later taken down by Twitter. However, the Gateway Pundit declaration is still up — and Trump advisor Ellis retweeted her promotion of the article early Monday morning.

Trump also endorsed the imprisonment of Governor Andrew Cuomo of New York, the initial epicenter of the pandemic. He retweeted the shout of actor James Woods, previously suspended by Twitter for hate speech, “#KillerCuomo should be in jail.”

Cuomo has been criticized for steps early in outbreak, such as the release of the elderly from hospitals into care homes. However, the epidemic has been successfully contained in the state, which now has one of the lowest infection rates in the US.

The governor responded later on Sunday:

The White House has learned nothing from COVID.

National threats require national leadership. It's been 6 months without a national strategy on testing or mask mandate.

Only the federal government has the power to go to war with COVID.

They are failing and the nation suffers.

Trump offered messages of support for violence, including the social media campaigns for right-wing militia to confront anti-racism marches.

Commenting on a report of a pro-Trump group firing paintballs and pepper spray at people, including journalists, he said:

The big backlash going on in Portland cannot be unexpected after 95 days of watching and incompetent Mayor admit that he has no idea what he is doing. The people of Portland won’t put up with no safety any longer.

He circulated a video of the right-wing convoy as “GREAT PATRIOTS!”, called protesters in Washington DC “Disgraceful Anarchists”, and further berated Portland Mayor Ted Wheeler, retweeting that he is “committing war crimes”.

Trump also gave his backing to Kyle Rittenhouse, the 17-year-old charged with the murder of the two marchers in Kenosha, Wisconsin.

Rittenhouse is a member of a right-wing militia that gathered in the city to face demonstrators, rallying because of the shooting of Jacob Blake by police two days earlier. Pursued by marchers after they were fired upon by the militia, Rittenhouse fired from the ground, slaying Anthony Huber and Joseph Rosenbaum as they tried to disarm him.

Trump liked a tweet that proclaimed, “Kyle Rittenhouse is a good example of why I decided to vote for Trump.”

On Thursday, Trump advisor Kellyanne Conway tipped off the campaign’s hope for disorder, using it to promote Trump as the salvation for America.

"The more chaos and anarchy and vandalism and violence reigns, the better it is for the very clear choice on who's best on public safety and law and order" — Kellyanne Conway makes a case that the killings of peaceful protesters will benefit Trump politically pic.twitter.com/ClJ6ArrbkE

In contrast, Democratic nominee Joe Biden denounced the “unacceptable” violence on all sides: “I condemn [it] uneqivocally.” He asked:

What does President Trump think will happen when he continues to insist on fanning the flames of hate and division in our society and using the politics of fear to whip up his supporters?

He is recklessly encouraging violence. He may believe tweeting about law and order makes him strong — but his failure to call on his supporters to stop seeking conflict shows just how weak he is.

Portland Mayor Wheeler also responded, including a reference to Trump’s acceptance of white supremacist marches and violence in Charlottesville, Virginia in August 2017.

He explained that right-wing counter-protesters had been “supported and energized by the President” to bring a large convoy into Portland, and continued:

Do you seriously wonder, Mr. President, why this is the first time in decades that America has seen this level of violence? It’s you who have created the hate and the division. It’s you who have not found the way to say the names of Black people killed by police officers even as people in law enforcement have. And it’s you who claimed that white supremacists are good people.

Trump, whose Twitter spree was paused so he could play golf in the afternoon, is threatening to go to Kenosha on Tuesday.