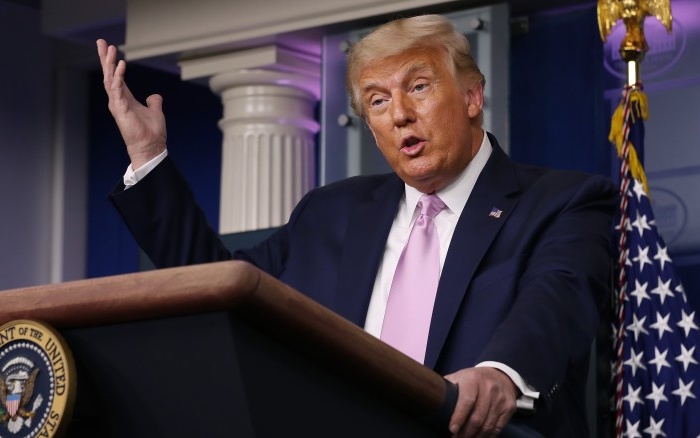 Donald Trump on far-right QAnon conspiracists: “I understand they like me very much, which I appreciate.” (Chip Somodevilla/Getty)

US deaths from Coronavirus reach 173,181 after a surge of 1,342 fatalities on Wednesday.

But Donald Trump prefers to offer encouragement to the QAnon far-right conspiracy movement that believes he is secretly fighting the “Deep State” and a criminal band of sex traffickers.

Asked about the conspiracists, who have spread through social media and now have their first proponents running for US Congress, Trump responded, “I’ve heard these are people that love our country. So I don’t know really anything about it other than they do supposedly like me.”

Trump ignored that increase, trying to portray the US as a success in comparison with other country. He proclaimed that New Zealand, with a total of only 22 deaths, “had a big outbreak”, and insisted “other countries…were held up to try and make us look not as good as we should look because we have done an incredible job, but they’re having a lot of outbreaks”.

He insisted that schools and universities must have full in-class instruction, even as their resumption this month has brought new outbreaks. Thousands of high school students have been quarantined. The University of North Carolina quickly moved to on-line instruction after 130 students tested positives. Notre Dame, with 146 cases, followed as did Michigan State University.

The QAnon conspiracy theory began with an October 2017 post on the discussion board 4chan by “Q”, who claimed to have access to classified information involving the Trump Administration and its opponents.

There was never any evidence for the claim, but activists spread the theory across platforms to build followers and make money.

Among the disinformation are smears of “liberal” celebrities and Democratic politicians as embers of an international child sex trafficking ring. The Trump-Russia scandal was portrayed as Trump skilfully exposing the ring and preventing a coup d’état by Barack Obama, Hillary Clinton, and George Soros.

Despite the outlandish claims, QAnon supporters made their way into the Republican Party. Café owner Lauren Boebert is the nominee for a Republican-held House seat in Colorado, and Marjorie Taylor Greene won a Republican primary last week for a seat in Georgia.

Congratulations to future Republican Star Marjorie Taylor Greene on a big Congressional primary win in Georgia against a very tough and smart opponent. Marjorie is strong on everything and never gives up – a real WINNER!

On Wednesday, Trump defended QAnon with the portrayal of anti-racism protesters and Democrats as the real threat, renewing his threat to deploy military and paramilitary forces.

They…would like to see problems in these areas, especially the areas that we’re talking about, go away. Because there’s no reason the Democrats can’t run a city. And if they can’t, we will send in all of the federal, whether it’s troops or law enforcement, whatever, they’d like. We’ll send them in. We’ll straighten out their problem in 24 hours or less.

A reporter asked, “The cause of the theory is this belief that you are secretly saving the world from this satanic cult of pedophiles and cannibals. Does that sound like something you are behind?”

Trump responded, “Is that supposed to be a bad thing or a good thing? I mean, if I can help save the world from problems, I’m willing to do it. I’m willing to put myself out there.”

REPORTER: QAnon believes you are secretly saving the world from this cult of pedophiles and cannibals. Are you behind that?

TRUMP: Is that supposed to be a bad thing? We are actually. We are saving the world. pic.twitter.com/rPYFU1B8WB