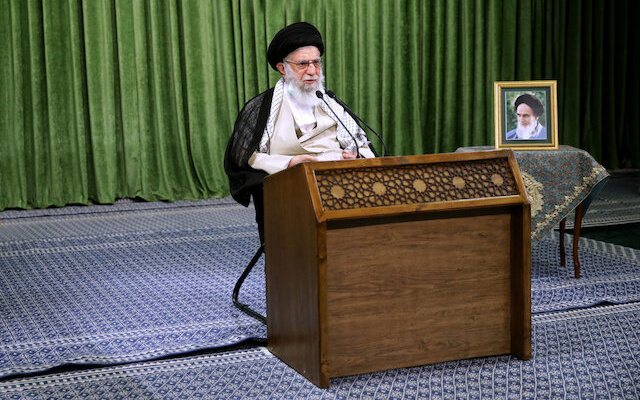 The Supreme Leader has acknowledged Iran’s economic crisis, while insisting that US sanctions have failed.

Ayatollah Khamenei has also called for an end to regime in-fighting, with the Rouhani Government challenged over its handling of the economy and a draft 25-year agreement with China.

Khamenei told legislators of the threat of an economic “disease”:

But his assurance of successful resistance was undermined by his blatant deception, “The participation of an acceptable number of people in the parliamentary elections is a sign of the people’s hopefulness and their expectation that the problems will be solved.”

In February, turnout in the Parliamentary ballot sank to just over 40%, an all-time low for the Islamic Republic.

More Signs of Crisis and Division

On Tuesday morning, the Iranian rial sank further in its historic drop to 233,300:1 v. the US dollar. The currency has declined more than 55% since the start of the year, eclipsing its previous low of 180,000:1, set just before the Trump Administration imposed comprehensive sanctions in November 2018.

Iran’s production, investment, trade, and employment have all fallen, with the sharp drop in oil export revenues threatening the Government budget. Exports to China, Iran’s largest customer, have fallen 53% compared to a year ago and trade with neighboring Turkey is down 70%.

Seeking stability, the Rouhani Government has turned to a draft agreement, first proposed in 2016, with Beijing. The arrangement reportedly brings $400 billion into the Islamic Republic over 25 years.

However, hardline MPs have assailed the Government, claiming lack of consultation and an imposition of Chinese power over Iran.

In a meeting, the Supreme Leader of the Revolution stressed the need for readiness and coordination of all bodies for confronting the enemy’s economic war, stating that the commander of this war should be the President and other branches should work alongside the government.

Accordingly, it was decided that decisions that require coordination between branches be binding for everyone after the approval of the Supreme Leader of the Revolution.

Rouhani duplicated the Supreme Leader’s proclamation success for the “enemy”: “So far, with all the existing problems, we have been able to overcome the problems with coordination and empathy, and in the coming year, the three branches can make effective decisions for the prosperity of the country’s economy.”

But he also acknowledged the difficult economic conditions…due to sanctions and the spread of Coronavirus”.

The Organization of Petroleum Exporting Countries issued another signal of Iran’s precarious position, reporting that Tehran’s income from oil exports and products fell almost 70% in 2019.

The organization did give a higher figure for Iran’s exports than that circulating for months, saying the Islamic Republic exported 651,000 barrels per day, with 60,000 barrels went to Turkey and the rest to Asia.

Kpler, an international data intelligence company, claimed Iran’s exports in the second quarter of 2020 averaged only 187,000 bpd, more than 90% down on the April 2018 level.

OPEC said Iran’s total oil and non-oil exports were $69 billion last year, down about a third from 2018.