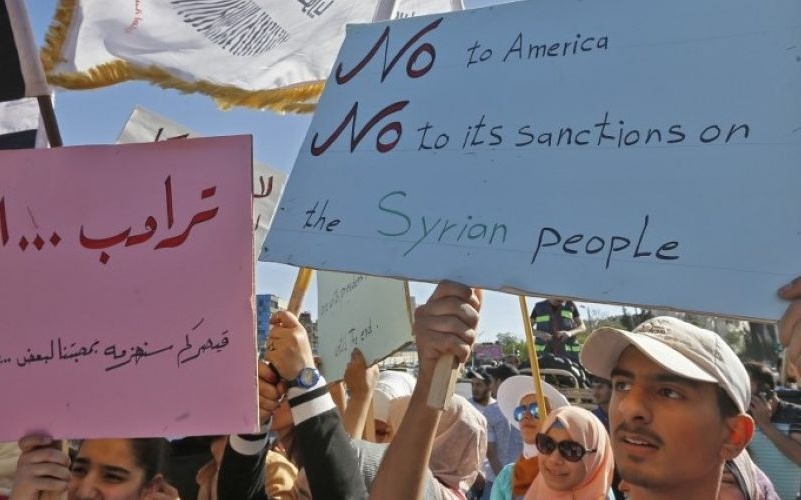 Trying to blame US “Caesar Act” sanctions for its economic problems, the Assad regime has tried to organize rallies in the areas of Syria which it controls.

State news agency SANA features photographs and videos of scores of people, portraying them as a “national stand”, in Homs, Tartous on the Mediterranean, and Daraa in southern Syria.

The groups are shown with flags and posters of Bashar al-Assad. One organizer proclaimed “unity of the Syrians and their standing by their leadership and their army in the face of all those who are trying to target their country”, the exact words used in SANA’s articles.

The US implemented the sanctions on Wednesday, over the regime’s crimes against humanity in Syria’s 111-month conflict. They are named after the defected military photographer “Caesar”, who brought out images of thousands of detainees slain by executions, tortured to death, or perishing from inhumane conditions.

The measures threaten to punish any company doing business with the Assad regime or with its essential backers, Russia and Iran, in any transaction connected with Syria.

There are specific sanctions against Assad’s wife Asma, his brother and sister, regime generals, and Iranian-led militia.

The Assad regime has carried out little reconstruction despite a Russian-enabled reoccupation of much of Syria. Inflation is rampant, and there are widespread shortages of food, fuel, and essential items.

The crisis has been compounded by banking problems in Lebanon, in which many Syrian companies and individuals hold accounts. Jordanian and Emirati investors say they have been deterreed by US warnings.