Rebels Without a Cause: The Confederate Flag in Ireland 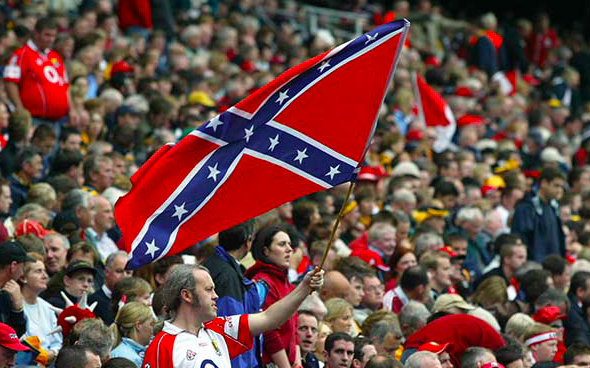 The flying of Confederate flags in support of the Cork hurling and football teams has recently been banned in Ireland. Although it has become an increasingly rare sight, fans of Cork have been flying the Stars and Bars for many years, usually with the pretext that it carries the same colors as their team.

While this premise is now widely challenged in Ireland, particularly amid ongoing racial violence in the US and the use of the flag as a hate symbol, there is a residual cultural investment in displaying this symbol while denying its racial connotations. That investment may be singular in the controversy it causes, but it is also reflective of a broader Irish interest in the culture of the American South.

The regional myths of the American South and West are symbolically mapped onto Irish culture – more often than not, onto rural Irish culture. They are perceived as predominantly non-urban, pre- or anti-modern, frontier spaces of America’s marginalized white peoples. These are the mavericks, the pioneers, the outsiders, who do not respect the powers of the state. These are the rebels and cowboys – of which Ireland has more than its fair share.

The American South, as much as the American West, is a deeply mythic space. Its historical origins and evolution are shrouded in narratives that symbolically designate it as a place apart in the US. That sense of difference is powerfully shaped by the Civil War and its legacies, though it both precedes and transcends that violent rupture in the new nation, due to the peculiarities of the region’s development and its attachment to the “peculiar institution” of slavery.