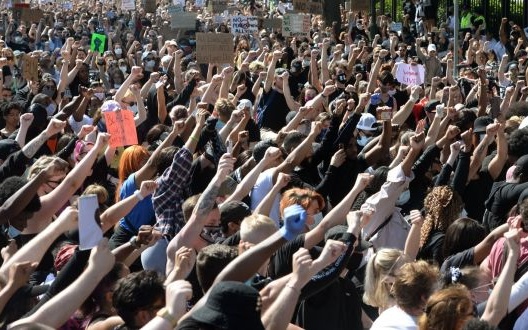 See “What is America Unfiltered?“

There have been protests in cities across Europe this week in solidarity with those in the US sparked by the death of George Floyd. The marches in London, Berlin, and Amsterdam might have been anticipated; the location of one of the largest protests in Dublin, Ireland may be more surprising.

Estimates of the crowd size at the march in Dublin on Monday put it at “over 5,000”, a remarkable turnout in the midst of a pandemic and with social distancing rules still in place in the country.

What did the protest – its occurrence and its scale – signify? The messages, in Ireland as elsewhere, are mixed, reflecting both global and local issues.

The World is Watching

The Dublin event was global in its mediations and messaging, an example of the growing symbiosis of social media and transnational protest movements to propel civic activism. A driving force is Black Lives Matters, the American social movement that has become a globalised phenomenon with influential circuits in youth and popular cultures as well as protest movements around the world.

The Dublin protest was predominantly made up of young people and strongly promoted by popular social media and music performers. The rally replayed iconic text and imagery via social media and placards, banners, and chants – “Black Lives Matter”, “I Can’t Breathe”, “No Justice, No Peace”, and “Silence is Betrayal”. Body language was also symbolic – a bent knee and a clenched fist as shorthand references to American protest iconography.

This is all of a piece with many protests across Europe, and it is clear that the demonstrations are posed against the Trump administration, especially an abandonment of global leadership which was already evident with the COVID-19 pandemic. There is a deep European disillusionment with the US today that swells the passions and numbers in the protests.

Ironically, just as the old ideological West, of the G-7, transatlantic intellectuals and NATO-focused think tanks is breaking down a new kind of transatlantic experience, born out of a common virtual Instagram and TikTok world, is coming alive.

However, there is much in this new form of transatlantic protest that is familiar from earlier versions. It is striking how much of the signage at demonstrations in different countries is in English, clearly intended as messaging to the US. In Dublin as elsewhere there were signs reading “The World is Watching” – echoes of “anti-American” demonstrations in many cities during the Vietnam War and again following the US invasion of Iraq in 2003. At such times the world holds a mirror up to America, denouncing its hypocrisies, measured in the distance between its soft power rhetoric and its hard power actions.

There is some irony in campaigners in grassroots protests across Europe, against injustices in the US, taking their cue from American activists, mimicking their methods and discourse. Not for the first time, European disavowals of American power reveal deep affiliations with American culture. Not for the first time, young generations of Europeans feel the need to save America from itself.