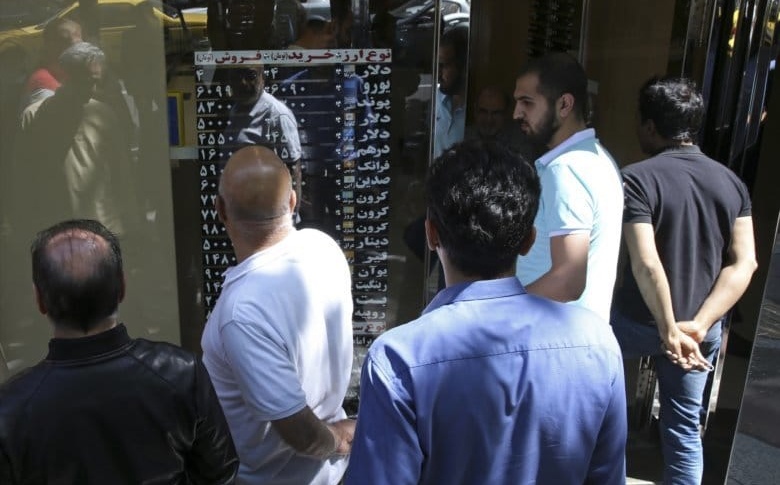 Iranians stand in front of a currency exchange in Tehran, April 10, 2018 (Vahid Salemi/AP)

The rial stands at 204,800 this morning, after a 35% dive this spring that has shattered the previous low of 180,000:1, reached just before comprehensive US sanctions in November 2018.

Economy Minister Farhad Dezhpasand and Central Bank Governor Abdolnasser Hemmati were summoned to Parliament on Monday over the devaluation, fed by long-term problems with production, investment, trade, and employment as well as the sanctions.

The Governor promised that the currency and economy would soon recover, but offered no explanation of the way back. He had asserted that the Bank would provide necessary foreign currency to businesses, but warned, “The psychological atmosphere created by the IAEA resolution should not lead people in the market to take it as a wrong signal.”

On Sunday, President Hassan Rouhani betrayed his concern, saying he will reveal the identities of those who have abused the Government’s subsidized exchange rate of 42,195:1 v. the US dollar.

The rate is offered to those providing essential imports. However, the Supreme Audit Court said in April that the Government had lost $4.8 billion because of diversion of funds.

See Iran Daily, April 15: Where is the Government’s Missing $4.8 Billion?

First Vice President Es’haq Jahangiri acknowledged Iran’s difficulties with a fall of up to 95% in oil exports since April 2018. He said oil revenues dropped from $100 billion to $8 billion between March 2019 and March 2020.

Exports to China are down 53% from last year, and trade with Turkey has fallen 70%.