The US and Us: Calling Out the Subtle Racisms in Our Communities 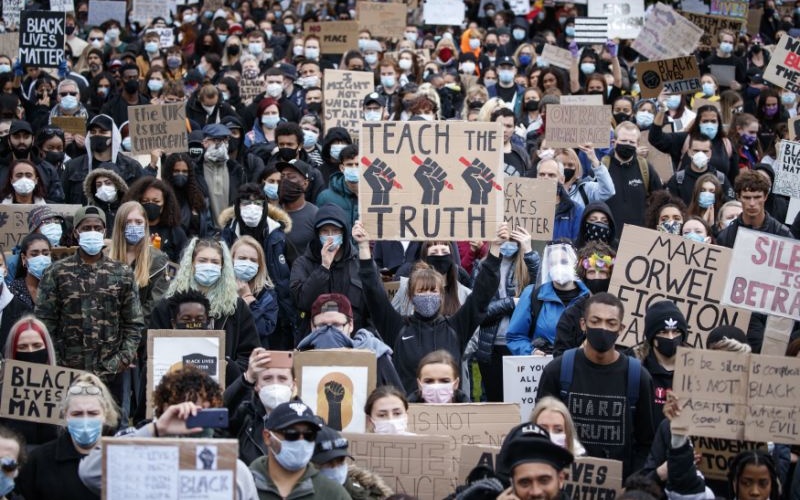 George Floyd, like many black men and women in the USA, is a victim of police and State brutality. This was not just the murder of a husband and father who happened to be African American. This was a message that structural racism is not only alive but also rampant.

See also EA on talkRADIO Special: The George Floyd Protests and the Way Forward in the US and UK

But structural racism is not just an American issue. This article is about the racisms in my own community, the UK Asian and Muslim community. These are not only in our institutions and organisations. These can be in our homes and families, and in our minds.

“He does look a bit dark?” A relative quipped this to my late mother upon seeing me soon after I was born. My features are common for those of South Asian heritage, but for my family member, I didn’t have the genes of the Macedonians who were said to have raped and pillaged their way across India. Almost 40 years later, the story within my family continues: seeing a newborn baby for the first time, an acquaintance said, “he’s dark compared to his parents who look so fair.”

My friend abruptly stood up and ran to the cloakroom. He returned a few minutes later with his wallet and phone. I asked, “Why the sudden rush?” He replied, “Don’t judge me, but when I saw that black man, I remembered my wallet and phone was in my coat – I didn’t want it getting nicked.” My face fell.

During a visit to South Africa, I noticed that most of the mosques had a black man as the muezzin, the caller of the prayer. My hosts told me, with some pride, that the brother was also the janitor of the mosque.

Islam’s first muezzin of the Prophet was a freed black slave, Bilal. It is a story that we Muslims are constantly told as a lesson that Islam has no place for racism.

Bilal, whom other Muslims referred to as “master” because of his knowledge and grace, was responsible for calling Muslims to the five daily prayers. In choosing Bilal for this honorable role, Prophet Muhammad demonstrated social exclusion and subordination based upon skin color was not to be permitted in a society.

But, if the story of Bilal serves the narrative that we are not racist, the challenge is in a mosque, run predominantly by South Asians in South Africa — a country with some experience of racism and aparatheid — whose “Bilal” is a janitor rather than an imam or chair of the mosque.

There is a verse in the Qur’an:

Oh people! Behold, We have created you all out of a male and a female, and have made you into nations and tribes, so that you might come to know one another. Verily, the noblest of you in the sight of Allah is the one who is most deeply conscious of Him. Behold, Allah is All-Knowing, All-Aware. (Qur’an 49:13)

If you have been shocked by George Floyd’s murder, let’s also be shocked by the many murders the system commits in India towards Dalits who are seen as a low caste and quite often subjected to racism and xenophobia. As Paras Sharma, a psychologist in India, told Vice magazine, “Mainstream media, including Bollywood and pop culture, mostly glorifies upper-caste Hindu culture, and rarely explores themes of violence against Muslims or casteism.”

In some Indian families, mothers would never let their children drink tea because they believed the legend that it darkens skin complexion. A dark-skinned Muslim is called “kala”, as a dark-skinned Indian labelled “madrasi” or some northeast Indians “chinno”.

This form of subtle racism is coupled for us with the notion of the “model immigrant”, when we are told that we contribute to society as make an effort to integrate in ways outlined by the host population.

If we align ourselves with the dominant majority, all will be well. Our social mobility distances us from less desirable communities, whether they are Muslim or Black.

During the construction of the East African railway in 1896, the British imported 32,000 laborers from India to work on the railways. It was thought that the Indians would make a serving diligent workforce whereas black people were too lazy, stupid, and volatile to do the work. Subsequently these Indians stayed on as shopkeepers, hotel workers, and administrators.

By the time the British began their process of leaving the colonies, the Indians had a stronghold on commercial trade in the area and had become the professional class. After Uganda’s Idi Amin expelled them in 1972, they were offered a safe haven in the UK. The general narrative was that these Asian immigrants were educated, entrepreneurial, and able to create employment opportunities.

But as Yasmin Alibhai-Brown has pointed out, it was not uncommon for Asians in Uganda to hold racist views about black people, mirrored the white establishment’s assumptions of indigenous Africans as stupid, dangerous, easy to fool, and incapable of commerce.

As multiculturalism became a concept in British society, many Asian households maintained the view that blackness is bad. Marrying a black man or woman is less prefered than marriage to a white man or woman.

Mira Nair’s 1991 film Mississippi Masala told the story of an American Asian woman falling for a black man. Almost 30 years later, if a black man was brought home in some Asian households, you’d find the same utterance of disbelief.

While we learn of #BlackLivesMatter and structural racism, let’s also understand our silence to the subtle racisms within our communities, families, and homes. Anti-Blackness isn’t just about the N-word. It’s the aunt who judges people on the fairness of their skin, the uncle who blindly uses “kala”.

Racism isn’t ended with the upload of a generic statement or a quote from the Qu’ran. We must be willing to listen, understand, and reflect on the colorism around us before passing lessons to the next generation. What makes people beautiful are their actions not the tones of their skin.