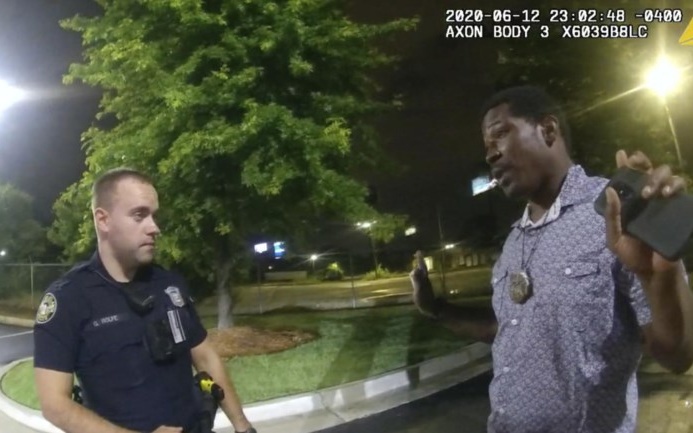 Officer Garrett Rolfe (L) is charged with the murder of Rayshard Brooks (R) after shooting him in the back in Atlanta, Georgia

A day after his photo opportunity with an order for police reforms, Donald Trump defends the killing of Rayshard Brooks by officers in Atlanta, Georgia.

Brooks was shot in the back by Officer Garrett Rolfe, who was charged with murder by prosecutors on Wednesday.

Police were speaking with Brooks after they found him asleep in his car in the parking lot of a Wendy’s restaurant. The conversation started amiably but became tense when police tried to handcuff Brooks. As he fled with a stun gun, Rolfe shot him.

Prosecutors said that Brooks posed no threat and that Rolfe kicked him and offered no medical treatment as he lay dying on the ground.

“The demeanor of the officers immediately after the shooting did not reflect any fear or danger of Mr. Brooks,” said District Attorney Paul Howard.

Trump told his friend Sean Hannity on Fox TV on Wednesday night, “You can’t resist a police officer.” He claimed, citing Rolfe’s lawyer, that the officer heard a sound like a gunshot and saw a flash in front of him.

Rolfe faces 11 charges. Devin Brosnan, the other officer at the shooting, has been charged with aggravated assault charge for standing on Brooks.

With Trump’s approval rating sinking and Democratic Presidential nominee Joe Biden’s lead widening, Trump’s advisors sent him out on Tuesday to sign an executive order for limited oversight by the Justice Department of State and local police forces.

The order sets out “credentialing” of forces on issues like data collection, training, and techniques such as chokeholds. In theory, Federal funds could be withheld.

The step also tries to cut off a bill by House Democrats for more substantive reforms, including curbing immunity for police officers from civil lawsuits over alleged violence.

In the 27-minute interview, Trump did not mention the issues raised by the Black Lives Matter marches after the May 25 killing of George Floyd at the hands of police in Minneapolis, Minnesota.

He denounced the protesters as “anarchists, terrorists, and looters….Many of them don’t know what they’re protesting.”

In contrast, he spoke of police forces “under siege right now” before giving a garbled account of the order and proclaiming that Democrats “want to abolish police” and the 2nd Amendment concerning the right to bear arms.

Fed by Hannity’s hyperbole and disinformation, Trump assailed State and local leaders as “weak”: “Police are told not to be there.”