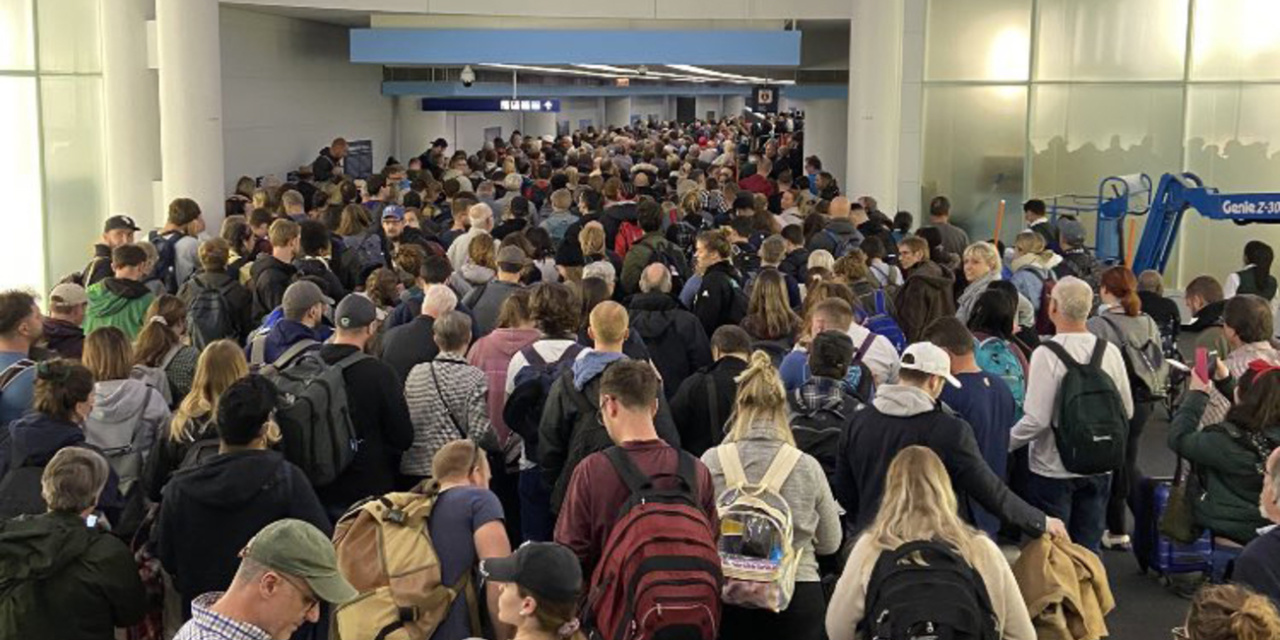 Passengers returning to US queue at Chicago’s O’Hare Airport, March 14, 2020

On March 11, the Trump Administration finally announced the suspension of travel from Europe to the US, in an attempt to check the spread of Coronavirus.

But the Administration’s announcement and implementation of the measure only helped an outbreak which was already established in America.

The Washington Post reports on the Administration’s mismanagement of the crisis, as the death toll in the US reaches 97,087 with more than 1.6 million confirmed cases.

The depiction is based on interviews with dozens of current and former US officials, as well as public health experts, airline executives, and passengers.

The detailed article also punctures Trump’s solitary claim of an effective response, as he called Coronavirus a Democrat and media “hoax” and said the death toll would be “close to zero” between January and early March.

It explains how Trump only imposed a ban on January 31 on entry into the US from China after US airlines said they would publicize their halt of flights.

Delta and American had announced on Jan. 31 they were suspending routes to China before Trump announced the restrictions. United informed the White House it had already decided to do the same but was willing to hold off on announcing it publicly if Trump was prepared to act swiftly in issuing an order, officials said. Eager to claim credit for acting to contain the virus, Trump’s announcement came within hours.

An Airport Petri Dish for the Virus

Trump said in a White House address on March 11, “To keep new cases from entering our shores, we will be suspending all travel from Europe to the United States for the next 30 days.”

The announcement spurred a rush of passengers on flights from Europe, many of them Americans looking to come home before the ban shut down travel. Airports such as O’Hare International in Chicago were packed with crowds waiting for several hours at passport and security control. Overworked screeners waved through people with cursory temperature checks.

Jack Siebert, a student returning from a year in Spain, summarized, “I can guarantee you that people were infected….It was people passing through a pinhole.”

Epidemiologists have assessed that the US outbreak is mainly due to viral strains from Europe rather than China. More than 1.8 million travelers entered the US from Europe in February, as Italy, France, and Spain became epicenters of the virus.

White House spokeswoman Alyssa Farah insisted, “The President took bold, early action that I think few leaders would be willing to take — and because of that he saved countless lives.”

A Lack of Preparation

But former officials and public health specialists note that the Europe measure came while the Trump Administration had taken no steps for social distancing and shelter in place. Businesses, schools, and churches were still open, and large public events were still being held.

On March 13, the US death toll was 176, with 3,714 confirmed cases. Three days earlier, Trump again denied that the outbreak was serious: “It will go away. Just stay calm. It will go away.”

It was only on March 16 that White House medical and public health advisors overcame Trump’s resistance and issued social distancing guidelines — recommendations that Trump soon tried to overturn.

Tom Bossert, a senior official in the Department of Homeland Security until last year, explains, “We kept foreign nationals out of the country but not the virus.” He says it was “a strategic miscalculation” to restrict travel rather than stopping the spread of infections already in the US.

The Administration was crippled by Trump’s sidelining of officials he considered “alarmist”, such as Health and Human Services Secretary Alex Azar. To ensure he kept control of discussions, Trump placed Mike Pence in charge of the White House Coronavirus task force on February 26. The move further delayed any significant steps by more than a week, as Pence was brought up to speed on the situation.

When officials finally decided on the ban on travel from Europe, the logistics of implementation in 48 hours were not discussed. Instead, Trump and son-in-law Jared Kushner focused on the staging of the announcement from the White House.

Kushner, White House advisor Stephen Miller, and Pence worked on the draft of Trump’s statement. Officials of the Coronavirus task force or US agencies were consulted.

As Trump stumbled through his speech, passengers going to Europe were waiting for takeoff. Learning of the ban, they rushed to exit planes and race through airports. Unprepared airlines had only been told of Trump’s speech minutes before it was delivered.

Urgently contacted by US agencies to arrange temperature checks, contractors were overrun. The Centers for Disease Control and Prevention did not distribute a new paper questionnaire to airlines in advance, leaving the crowds of passengers to fill it out upon arrival. The chaos and inadequate arrangements meant contact tracing was impossible.

“Horse Out of the Barn”

The implementation of the March 11 announcement had worsened an already-dangerous situation, fed by the Administration’s failure to take significant steps in the previous six weeks.

By mid-February, European strains of Coronavirus were established in New York City, according to epidemiologists. The virus crossed the Atlantic in both direction in following weeks, with no screening of travelers entering the US.

An April study, led by researchers at Northeastern University in Boston, concluded that New York City probably had more than 10,000 undetected cases by March 1 with thousands more cases in San Francisco, Chicago and other cities.

“Horse out of the barn,” said Prof. Stuart Ray, an expert on infectious diseases at Johns Hopkins University.

He cited the lack of testing, distribution of protective gear, and clear public messaging about social distancing: “Without those. transmission would have overtaken any benefit of travel ban.”