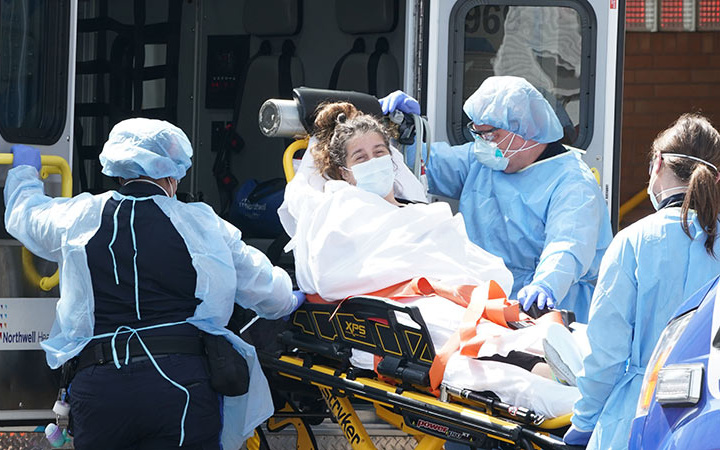 The US death toll from Coronavirus has reached 96,007. There are more than 1.6 million confirmed cases.

A study of 96,000 Coronavirus patients punctures Donald Trump’s promotion of the anti-malarial drug hydroxychloroquine as a “wonder cure”.

Results from the study, across six continents, were published on Friday in the medical journal The Lancet. Those who received hydroxychloroquine had a significantly higher risk of death compared with those who did not. The research also verified the drug’s potentially-fatal side effect of an irregular heart rhythm.

We found no evidence of benefit of hydroxychloroquine or chloroquine when used either alone or with a macrolide. Previous evidence was derived from either small anecdotal studies or inconclusive small randomised trials….

Although observational studies cannot fully account for unmeasured confounding factors, our findings suggest not only an absence of therapeutic benefit but also potential harm with the use of hydroxychloroquine or chloroquine drug regimens (with or without a macrolide) in hospitalised patients with COVID-19.

The analysis was of patients treated between December 20 and April 14 at 671 medical centers. The mean age was 54 years, and 53% were men. Among almost 15,000 who took hydroxychloroquine, the risk of death increased by 34% with a 137% increased risk of irregular heart rhythm.

Harvard University’s Mandeep Mehra, who led the study, said that while the use of hydroxychloroquine was based on “a desperate disease demands desperate measures”, the prescription of the drug without systematic testing was “unwise”: “I wish we had had this information at the outset, as there has potentially been harm to patients,” he said.

Friday’s findings amplify those of at least 13 studies in recent months on hydroxychloroquine or chloroquine as a treatment for Coronavirus. The randomized controlled studies and observational analyses have found almost no evidence of benefit. All have cited the side effect of adverse cardiac reactions, especially when hydroxychloroquine is combined with the antibiotic azithromycin.

“It’s one thing not to have benefit, but this shows distinct harm,” assessed Eric Topol, a cardiologist and director of the Scripps Research Translational Institute. “If there was ever hope for this drug, this is the death of it.”

David Maron, director of preventive cardiology at the Stanford University School of Medicine, concluded, “These findings provide absolutely no reason for optimism that these drugs might be useful in the prevention or treatment of Covid-19.”

In mid-March, Trump began promoting hydroxychloroquine. He was spurred on by Fox TV “doctors”, a Bitcoin speculator, a billionaire donor, and his personal attorney Rudy Giuliani.

He falsely said the Food and Drug Administration had approved the drug’s use. He continued to say there could be no harm from ingesting it, despite the caution of White House medical advisor Dr. Anthony Fauci that there had been no reliable testing.

Last week, in an attempt to deflect from a US death toll nearing 100,000, he proclaimed that he had been taking hydroxychloroquine for two weeks, falsely implying that it could prevent infection by Coroanvirus.

At a White House briefing on Friday, White House Coronavirus coordinator Dr. Deborah Birx avoided a direct answer to a question about Trump’s drug use. However, she emphasized that the FDA “has been very clear on their website about their concerns about hydroxychloroquine”.

Dr. Birx prioritizing walking a fine line in her answers so as not to upset or undercut what Trump has said just made every answer she gave so confusing. People need clear, honest instruction on how to protect themselves and this news conference did NOT do that. pic.twitter.com/BsrAQa7wHK

In late March the FDA gave emergency authorization for the use of hydroxychloroquine, but last month it posted a warning against use of the drug outside hospital settings or clinical trials because of the risk of “serious heart rhythm problems”.

FDA spokesman Michael Felberbaum said Friday that the emergency use authorization may be revised or revoked under certain circumstances, such as linked or suspected adverse events, new data about effectiveness, or changes in the risk-benefit assessment of the drug.