Celebrations and Protests in Syria’s Idlib for End of Ramadan 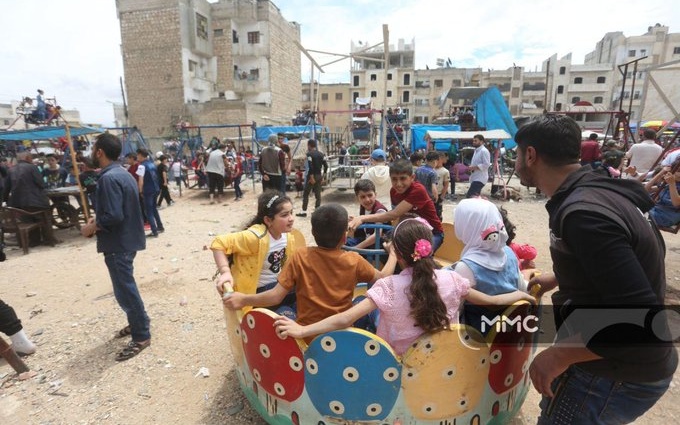 Residents in the opposition-held part of Syria’s partitioned Idlib Province have marked the end of Ramadan with celebrations and protests.

Idlib, in northwest Syria, is part of the last major opposition territory in the country. It held out against an 11-month Russian-regime offensive, which killed about 2,000 civilians, wounded thousands, and displaced more than 1 million before a ceasefire in early March.

About 200,000 of the displaced have returned to their homes. Although occasional shelling by pro-Assad forces continues, the agreement between Turkey’s President Recep Tayyip Erdoğan and Russian counterpart Vladimir Putin has blocked any Assad regime attempt to overrun the opposition area. Meanwhile, demonstrators have restricted Turkish and Russian patrols of the cross-Idlib M4 highway.

On Monday, some residents marked the end of Ramadan, Eid al-Fitr, with a fun fair in Idlib City.

Others gathered at the M4 highway, marking the ongoing challenge to any “occupation” after pro-Assad forces seized almost all of northern Hama Province and part of Idlib in their offensive. 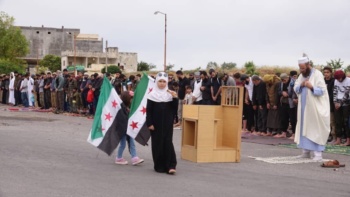 And others rallied across the province in calls for pro-Assad forces to withdraw and for safe return of the displaced to their homes under the supervision of the international community:

Safe return of the displaced not only means to homes in freed areas — still targets of daily violations of the ceasefire by regime militias — but also all areas, covered under the Sochi agreements [between Turkey and Russia in September 2018], which were later captured by pro-Assad forces.

The analyst adds about the hardline jihadist bloc Hay’at Tahrir al-Sham which had controlled much of Idlib, “their days are counted”: “Turkey sends convoys to greater Idlib on a daily basis, and establishes bases and checkpoints all across the territory, even in core HTS areas. There’s no way for HTS to oppose that, given the threat of a renewed regime offensive.”

A demonstration was launched in several areas to demand the withdrawal of the Assad regime forces from the area and the return of the displaced and the displaced persons to their homes. pic.twitter.com/NVfLU3zBq1

"The Flood of Return" … a massive demonstration in the city of Idlib calling for the return of the displaced to their areas and the release of the detainees. pic.twitter.com/c0aYzKsZe8