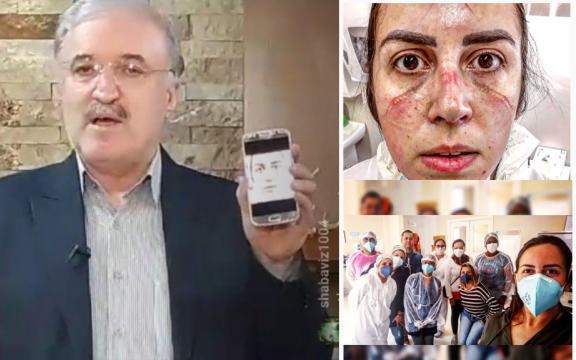 As Iran’s official death toll from Coronavirus nears 5,000, authorities have responded with a faked photograph and a declaration of “magnetic virus detectors”.

The Health Ministry said on Wednesday that 4,777 people have died. There are now 76,389 confirmed cases, with 3,643 patients in critical condition.

The 94 deaths in 24 hours was the smallest increase in weeks. However, the news was overshadowed by the performance of Health Minister Saeed Namaki at a press conference.

Praising Iran’s medical workers for their courage, he displayed a photo which he said was of an Iranian nurse, who had sores on her face from wearing a mask all day.

To get an idea of how much pressure our colleagues are under, just look at this photo. It’s the image of a colleague, one of my sisters, an image that was sent to me from one of our hospitals. She is a dear nurse who works in an ICU. This is what happened to her beloved face after hours of torture wearing a mask.

In other countries, nurses and doctors facing equipment shortages have taken to the streets.

But Namaki’s photo, which he displayed on his mobile phone, was not that of an Iranian health care worker. It was of a nurse from Brazil, Amanda Ramalho, who posts photos from the hospital in Rio de Janeiro where she works. Her self-portrait appeared on the Instagram page Diaries From the Field, with images of medical staff from around the world.

There was no explanation for Namaki’s choice of the photo, rather than one of an actual Iranian nurse.

On March 23, France 24 reported that at least 62 Iranian medical personnel had died from Coronavirus. The outlet spoke with 11 doctors and nurses who defied orders not to talk with media.

A nurse from Qom, the initial epicenter of Iran’s outbreak, said:

Now that the epidemic is in full swing and our hospital is full of people contaminated with the virus, we have no equipment at all. We’re in danger of getting infected ourselves.

All they give us is a disposable operating room gown that does nothing to protect us from any virus….The regular masks that hospitals issue don’t protect medical staff who are in close contact with patients. In any case, we don’t even have enough of the regular masks either.

We have mentioned these problems to the governor and the Health Ministry, but nothing has changed.

Revolutionary Guard commander-in-chief Maj. Gen. Hossein Salami proclaimed on Wednesday that the Guards have invented a machine that can detect Coronavirus within a radius of about 100 meters.

Flanked by high-ranking officials, Salami displayed the machine in a televised interviews at the Guards’ General Headquarters. He said the detector, with an antenna and a dish, had been tested in hospitals and is about 80% reliable.

Salami said the antenna’s “polarized viruses” that create a magnetic field that can be used for mass screening as well as detecting contaminated areas and people. He said the machine will be mass-produced after the Health Ministry assists in obtaining licenses.

Journalist Maryam Sinaiee notes that the device is similar in appearance to a detector used by Iranian authorities to find smuggling of fuel in tankers and large vehicles.