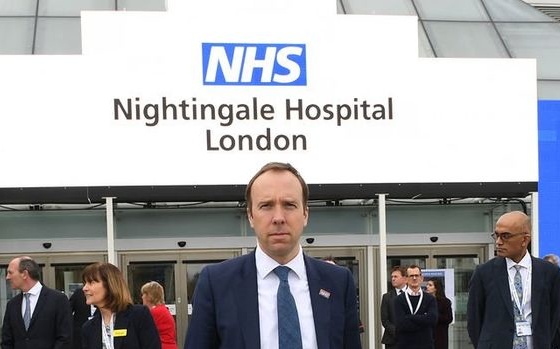 Coronavirus headlines in the UK are dominated by a death toll higher than the Government’s official figure and by shortages of critical medical equipment, in part because of the failure to make preparations from January to March.

See also EA on talkRADIO: Coronavirus — Why UK Government Got It Wrong…and What It Must Do Now

Al Jazeera English’s James Brownsell writes about the latest questions over the Government’s actions and statements, with a contribution from EA: “It is vital in this crisis for the government to be honest and transparent; otherwise, there is no trust in the steps being taken.”

The head of the United Kingdom’s diplomatic service was on Tuesday forced into a U-turn after admitting the government had made “a political decision” not to join a European Union-wide scheme to buy medical ventilators in bulk as the scale of the Coronavirus outbreak was becoming known.

Simon McDonald, the top-ranking civil servant at the Foreign and Commonwealth Office, had testified — after being repeatedly pressed by members of Parliament’s Foreign Affairs Committee — that “it was a political decision. The UK mission in Brussels briefed ministers about what was available, what was on offer, and the decision is known”.

His admission sparked fury on the day it was announced a further 852 people had died in hospital, pushing the UK’s total Coronavirus deaths in hospital to 17,366 – a number thought likely to be undercounting the true toll by thousands. The government, under fire for seemingly prioritizing the politics of Brexit above the immediate needs of the health service and its citizens, had previously said the UK had not joined the ventilator procurement scheme because of an e-mail error.

When first asked on Tuesday afternoon why the UK had not signed up to the huge EU ventilator procurement programme, McDonald said it was indeed due to Brexit — the country had left the EU at the end of January, he said.

Tom Tugendhat, the Conservative MP who chairs the committee, pressed further: “Maybe I could ask, Sir Simon, what was your policy advice on it? Or was it a political decision?”

At that point, McDonald made his “damning” remarks that ministers had been briefed and a political decision made.

Here is the exchange on this issue at this afternoon's Foreign Affairs Committee. pic.twitter.com/7nBrtmjWzR

The UK government instead opted to ask British engineering firms such as Rolls-Royce to reorientate their operations towards designing and building new ventilator models. But few of the 22,000 ventilators needed – including 10,000 offered by longtime Conservative Party associate James Dyson, the founder of vacuum cleaner manufacturer Dyson – had arrived in hospitals as the UK approached the peak week for pressure on the health service.

The head of a consortium of businesses tasked with producing ventilators insisted the government had been correct to approach leading companies with large operative capacities rather than relying on small producers.

“We’re keeping our heads down, building to a schedule set by the Cabinet Office, and if we build more than required, that’s a good thing,” VentilatorChallengeUK chairman Dick Elsy told The Guardian. His project’s work involves thousands of staff, dozens of companies, and distribution logistics managed by the military. VentilatorChallengeUK has so far delivered 250 ventilators, with hundreds more expected this week.

McDonald’s remarks overshadowed the daily government press briefing on Tuesday, with Health Secretary Matt Hancock stumbling to explain the government’s position. He rejected the veteran civil servant’s comments, saying “as far as I am aware, there was no political decision not to participate in that scheme”.

He added that he had subsequently taken the decision to join the scheme when the offer came in, “so we are now members”.

Late on Tuesday evening, McDonald issued a “clarification”, in which he said that everything he had told the committee that afternoon had in fact been incorrect.

“Ministers were not briefed by our mission in Brussels about the scheme and a political decision was not taken on whether or not to participate,” he wrote. “The facts of the situation are as previously set out. Owing to an initial communication problem, the UK did not receive an invitation in time to join in four EU COVID procurement schemes.”

Hancock had been prepared at the daily press conference to tout two new government announcements – that the UK was working with 159 UK manufacturers to produce more personal protective equipment (PPE) – another area in which the government has been fiercely criticised – and that of two teams who had received 50 million pounds ($61m) in funding to work on a coronavirus vaccine, one was due to start human testing on Thursday.

“It seems to me that the UK government originally decided not to join the EU scheme for Brexit-related reasons, but may have subsequently changed course to join because of the seriousness of the crisis,” Brexit and trade expert David Henig told Al Jazeera.

“The messaging has tried to avoid all of this, in particular any suggestion of a ‘Brexit before breathing’, and has ended up a mess,” added Henig, the UK director of the European Centre for International Political Economy.

“It isn’t a good sign for our future EU relationship that the government can’t untangle themselves.”

A Downing Street spokesperson offered to e-mail a statement on the issue to Al Jazeera, but it had not arrived by the time of publication, several hours later.

“Simon McDonald’s statement that the government made a ‘political decision’ not to join the EU ventilator procurement scheme last month is doubly damning,” Scott Lucas, professor of international politics at the University of Birmingham, told Al Jazeera.

“[Chancellor of the Duchy of Lancaster] Michael Gove was at the least ‘economical with the truth’ – some might say ‘lying’ – when he said on March 29 that the issue was a misdirected email, and not politics.

“It is vital in this crisis for the government to be honest and transparent; otherwise, there is no trust in the steps being taken to deal with this virus. And right now, rather than acknowledging past mistakes and current difficulties, the government appears neither honest nor transparent.”

David Allen Green, a lawyer who writes on matters of law and policy, and himself a former UK civil servant, said Sir Simon’s statement was “curiously and painfully worded”.

He went on to say the writing suggested an “[illusionist] Derren Brown-like misdirection”.

Will McDonald’s remarks or his retraction make a difference when it comes to holding the Johnson administration to account over its handling of the crisis? The UK is already one of the European nations hardest hit by the coronavirus, and the daily death toll has yet to show any sign of a decreasing trend.

“Given the outcome here, one might expect some public outcry,” said Mark Shanahan, head of the politics and international relations department at the University of Reading.

“But every day the government has a free pass in terms of communication; half an hour to get their messages across in the live daily briefings, while dissembling to their chosen journalists and not having to defend their decisions in Parliament,” he told Al Jazeera.

“Today’s Hancock denial seemed quite Trumpish, the spinning of an alternative truth. But while the government is riding high in the polls and retains the trust of the majority of the general public, their choices — which may be seen to put ideology over national interest – are rather too feebly challenged.”