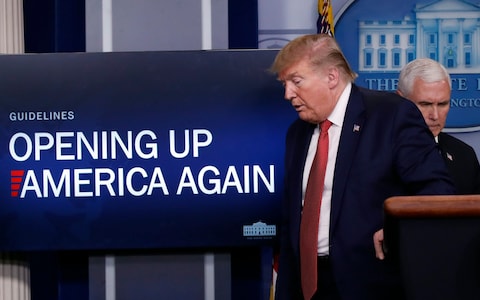 Wounded by criticism of his “disinfectant” remarks, Donald Trump spends Sunday ranting on Twitter as the US death toll from Coronavirus nears 55,000.

Trump’s attempts to turn White House Coronavirus briefings into campaign rallies backfired last week. His endorsement of illegal protests fizzled, as the White House quietly dropped his pledge to “re-open” the US by May 1.

Then on Thursday, he suggested the ingestion of disinfectant and ultraviolet treatment to kill the virus. Medical professionals, State leaders, and Government agencies responded with horror and concern at the life-threatening comments. Trump was mocked relentlessly on social media, as he claimed falsely that he was only being “sarcastic” with journalists.

On Friday, Trump uncharacteristically refused questions after a short presentation at the briefing. On Saturday, he petulantly tweeted that he would no longer appear, blaming the “LameStream Media” for “hostile questions”.

See also How Trump’s “Deep State” Myth Left US Unprepared for a Pandemic
EA on talkRADIO: Why is No One Stopping Trump’s Dangerous Coronavirus Statements?

Trump simply shifted his podium from the White House briefing room to Twitter all day Sunday.

He began with a rant about reports of how his initial denial of Coronavirus and blocking of Federal Government preparations has been compounded by days mainly watching television and fuming about coverage: “I work from early in the morning until late at night, haven’t left the White House in many months.”

But his attack backfired when he devoted several tweets denouncing journalists who have won “Noble” Prizes for their reporting. 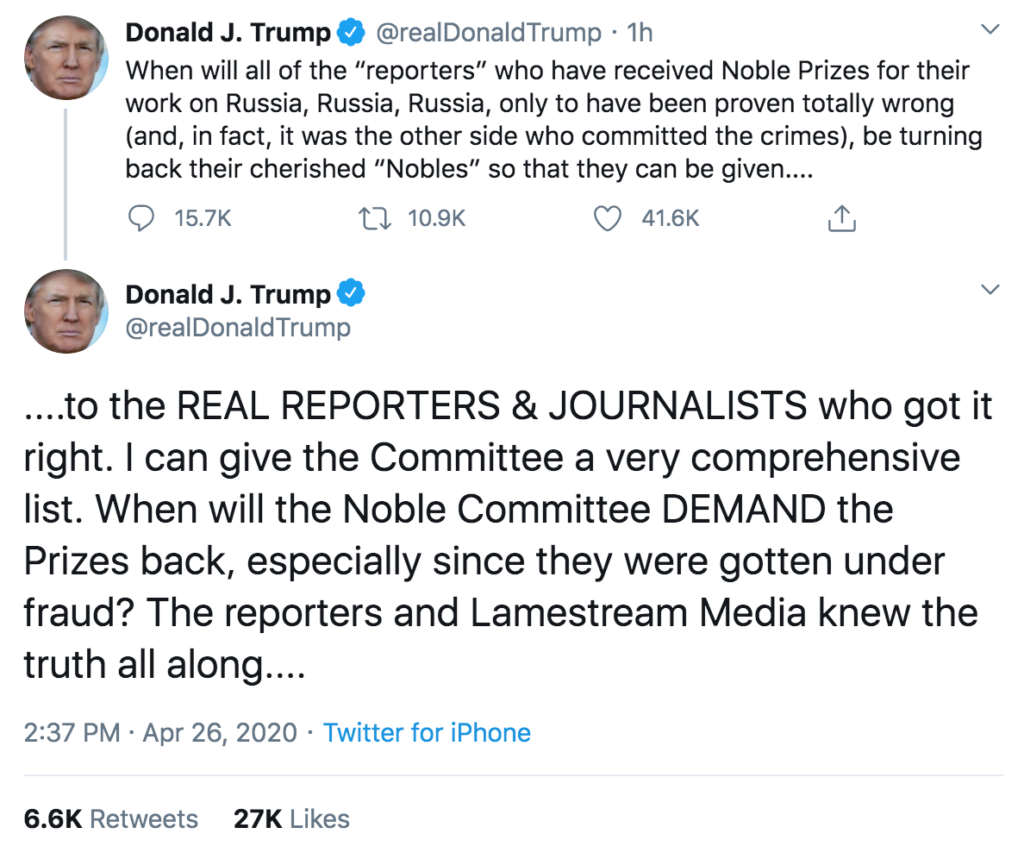 Trump was teased over his spelling of “Nobel”, and commented noted that he was referring to Pulitzer not Nobel Prizes. He finally deleted the tweets and tried to portray his mistake as deliberate, in a refrain of his disinfectant retreat, “Does sarcasm ever work?”

Even Trump’s favored outlet Fox TV was not immune from his tweetblast, after the channel’s Chris Wallace — known for his journalism rather than his polemics — interviewed Treasury Secretary Steven Mnuchin:

@FoxNews just doesn’t get what’s happening! They are being fed Democrat talking points, and they play them without hesitation or research….The people who are watching @FoxNews, in record numbers (thank you President Trump), are angry. They want an alternative now. So do I!

Trump pushed back Saturday reports, from “senior administration officials”, that Health Secretary Alex Azar may soon be fired and blamed for the Administration’s mismanagement of the crisis.

Trump used his standard epithets “Fake News” and “Lamestream Media” and proclaimed, “Alex is doing an excellent job!” But analysts noted that Trump has issued similar denials before then firing White House advisors.

He spent Sunday night shouting at media, “They are total slime balls”, and circulating messages, many of them with disinformation. At one point, he retweeted an account titled, “Trump & Biden Are Rapey”.

Birx said on NBC News’s “Meet the Press”, “Social distancing will be with us through the summer to really ensure that we protect one another as we move through these phases.”

She repeated that further testing is needed, after a scientific “breakthrough” for “ease of use”, to ensure Coronavirus is contained.

Birx and Dr. Anthony Fauci, the White House’s infectious diseases specialist, have said that 500,000 tests per day are needed to trace and track the virus, before any significant lifting of stay-at-home provisions.

But US testing has plateaued for weeks at 150,000 per day. State governors, organizing the effort in the absence of Federal coordination, have pointed to shortages of lab tests and chemical reagents.

Several states have begun easing restrictions, even though medical guidelines of a 14-day drop in the rate of deaths have not been met. Other governors announced plans this weekend.

Birx was careful to avoid criticism the state leaders, praising those who “insightful” in “talking of this not as turning on a light switch but in turning up a dimmer”.