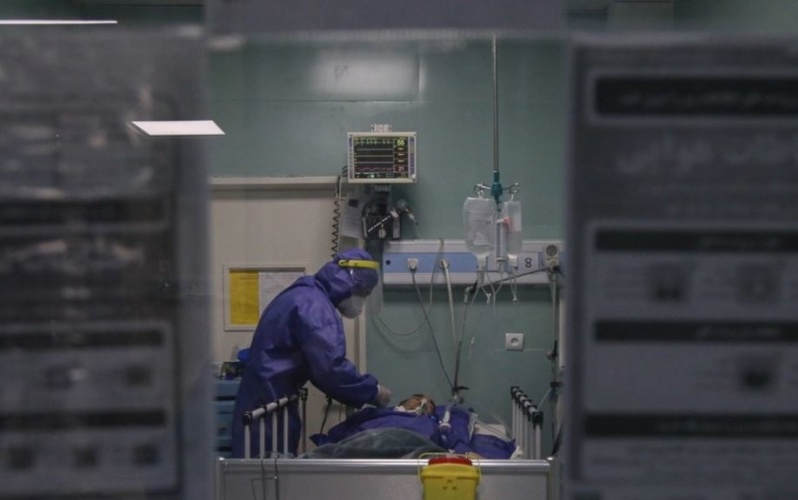 A doctor treats a Coronavirus patient in the intensive care unit of a Tehran, Iran hospital, March 23, 2020

At least 4,298 people in Iran have died from Coronavirus, according to the Radio Farda website.

Drawing from provincial and local information as well as official statements, the site says there are 66,567 suspected cases.

The Iranian Health Ministry’s official toll on Sunday was 2,640 deaths and 38,309 cases.

The Ministry only counts those who have tested positive, excluding untested patients with clinical symptoms. President Rouhani has ordered the Ministry to review its methods and acknowledge those with symptoms, but the command has been ignored so far.

Radio Farda says its numbers may be conservative, with Iranian officials refusing to publish numbers of cases for each of Iran’s 31 provinces.

Most victims are in the capital Tehran and the provinces of Isfahan, Gilan, Mazandaran, Golestan, Khorasan Razavi, Tehran, and Qom.

Alireza Zali, in charge of operations in Tehran Province, told a session with 1st Vice President Es’haq Jahangiri that 23,000 people in the province have been hospitalized for respiratory complications. He said 70% of them were suffering from Coronavirus.

Radio Farda claims at least 826 people have died in Tehran Province alone in the past month.

Iran’s judiciary has extended prison furloughs for about 100,000 detainees.

Spokesman Gholamhossein Esmaili announced on Sunday that the furloughs will continue to April 19.

Among those given another two weeks is Anglo-Iranian political prisoner Nazanin Zaghari-Ratcliffe, seized in April 2016 as she was leaving Iran after visiting her mother and other relatives.

Every extra day Nazanin is out of jail is better than the alternative – but we must not lose focus on getting her home and away from the danger of Coronavirus in Iran as soon as possible #FreeNazanin https://t.co/P9TLi97NBF

The Supreme Leader hailed the efforts of health workers on Sunday, in a letter to Health Minister Saeed Namaki.

The employed measures are good and effective. The screening plan is a great job. Using Basij and voluntary forces will make a significant contribution to the release of the country from the grip of the pandemic. Of utmost importance is keeping up the momentum of all-out efforts.

However, in an open letter, 100 Iranian political and civic activists noted Ayatollah Khamenei’s delay in acknowledging the crisis last month.

On February 23, weeks after Iranian officials first noted the danger of the virus, Khamenei said fear of the illness was a “Western plot” to depress turnout in Parliamentary elections two days earlier.

The activists, based outside Iran, also criticized President Rouhani for following Khamenei’s lead to proclaim that news of the outbreak was a “foreign conspiracy”.

They summarize, “A golden opportunity to contain the dangerous virus was wasted.”

In a video conference with reporters, Dr. Ali-Akbar Haqdoust, the head of the Epidemiology Committee of the National Coronavirus Combat Taskforce, has admitted there was a delay in the detection of the virus in Iran. He acknowledged that it was spreading from about January 20 “without being noticed”.

The signatories also criticized the regime for expelling a team from Médecins Sans Frontières‎, which had arrived in Iran last week to set up a 50-bed field hospital and to deliver medical aid.

President Rouhani and Ministers approved the mission, but were reportedly overruled by the Revolutionary Guards and the Supreme Leader’s office.