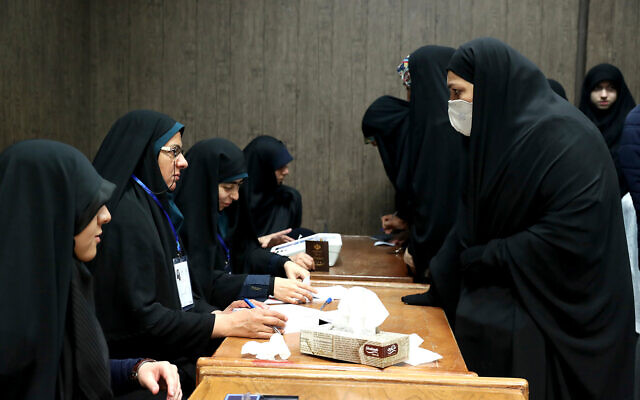 A majority of hardliners and conservatives in the Majlis has been guaranteed for weeks, with the Guardian Council’s ban on more than 90% of reformist candidates. This will overturn the centrist-reformist bloc that took the largest share of seats in the 2016 ballot.

However, the Supreme Leader, President Hassan Rouhani, and other officials have been desperate for a turnout close to the 62% in the contest four years ago and 66% in 2012. In the guise of a response to the US “enemy”, they have been hoping for a display to counter that of economic crisis and mass protests across Iran, including in November after the Government suddenly increased petrol prices by 50% to 200%.

Officials tipped off concern throughout Friday, as some polling stations had queues but others were largely empty. Voting hours were extended as Intelligence Minister Mahmoud Alavi said he hoped turnout would reach “an acceptable level”.

Voter interest has been challenged by the long-standing economic issues, US sanctions, and the lack of choice after the mass disqualification of the reformists.

Conservative outlet Tasnim News claimed a turnout of 40%, with hours to go in the ballot. But they showed worry as they accused the Interior Ministry — wrongly — of “refusing to extend the voting hours”.

Fars, the site of the Revolutionary Guards, also proclaimed 40% turnout as of 6 p.m.

However, in contrast to previous elections, State officials did not announce turnout during the day. The Governor of Tehran Province, Anoushirvan Mohseni Bandpey, said the practice was suspended without giving a reason.

In the last official announcement, made at 3 pm — seven hours after polls opened — the head of the National Election Headquarters said 11 million of 58 million Iranians on electoral rolls had voted.

An Iranian official said the National Election Headquarters would announce the turnout after polls closed just before midnight. Interior Minister Abdolreza Rahmani Fazli confirmed the statement would be on Saturday.

However, as of 10:30 am local time, there is still no declaration of the turnout via Iran’s English-language media.

Video of an empty polling station from Kerman Province: