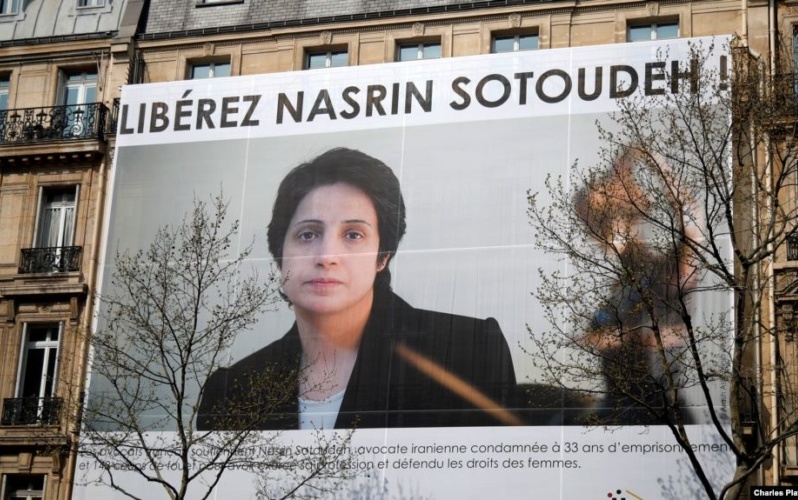 A banner supporting the imprisoned Iranian lawyer Nasrin Sotoudeh on the headquarters of the French National Bar Council, Paris, March 28, 2019

Amnesty International has challenged the Iran regime’s repression of human rights, in an annual report about “lethal force” against protesters, mass detentions, treatment of political prisoners, and “entrenched discrimination” against women, ethnic groups, and religious minorities.

The report summarizes the response to November’s mass demonstrations, spurred by the Government’s sudden announcement of a 50% to 200% rise in petrol prices. At least 304 protesters were killed, according to verified information collected by Amnesty. Iranian officials said more than 7,000 people were detained, and the Internet was almost completely shut down to prevent news and images of the protests and repression from circulating.

Amnesty summarizes that at least 240 human rights activists were seized. They included lawyers and specialists in labor rights, the environment, minority rights, and women’s rights. Family members were interrogated and harassed.

Activists were been detained in the wake of April’s flooding that devastated much of Iran. Others were imprisoned after demonstrations on International Women’s Day and International Workers’ Day, and for joining a long-running protest at the Haft Tappeh sugar plant in southwest Iran.

Human rights lawyers have been seized. Nasrin Sotoudeh was punished with 33 1/2 years and 148 lashes in March, with the command that she serve at least 12 years behind bars. In June, Amirsalar Davoudi was sentenced to 29 years and three months and 111 lashes.

Journalists continue to be targeted, including at least a dozen detained since the November protests. Among them are Masoud Kazemi, sentenced to 4 1/2 years, and Marzieh Amiri, condemned to 5 years and 148 lashes for “spreading propaganda against the system”.

Citing the “entrenched discrimination” against women “in family and criminal law”, Amnesty cited intimidation of activists. Three women — Yasaman Aryani, Monireh Arabshahi, and Mojgan Keshavarz — were given sentences of 16 to 23 1/2 years for activities on International Women’s Day such as handing out flowers on the Tehran Metro.

Punishment of religious minorities includes the persecution of Baha’i members, refusal to recognize Yaresan members, and the imprisonment of dozens of Gonabadi Dervishes. Dozens of Christians, including converts, have been subjected to harassment and detention, and raids on churches continue.

Amnesty cites the “ongoing crime against humanity” of Iran’s concealment of the fate of thousands of political dissidents who disappeared amid mass executions in 1988. Officials involved in the mass killings include Ebrahim Raisi, appointed as judiciary head in March, and Justice Minister Alireza Avaei.

The organization notes that Iran continue to bar entry to the country to human rights observers, including the UN Special Rapporteur, multiple UN agencies, and Amnesty staff.