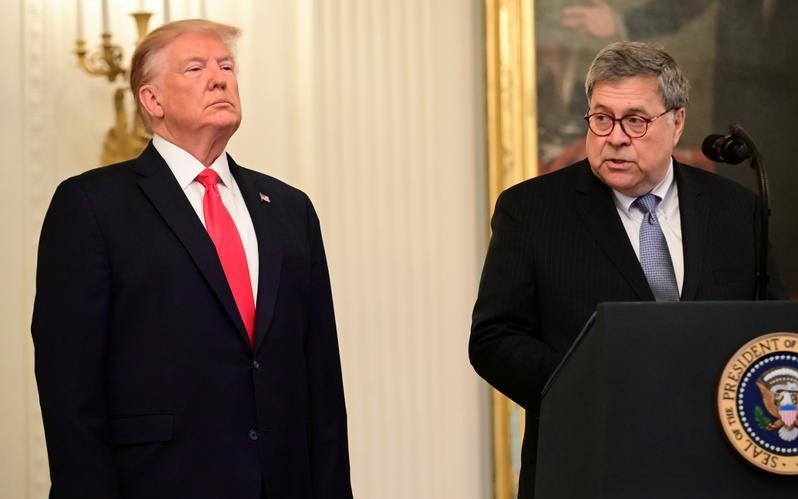 On Tuesday, amid a Trump tweet, Barr directed senior Justice Department officials to overrule prosecutors who recommended a sentence of 7 to 9 years for Roger Stone, Trump’s longtime friend, “dirty tricks” operators, and Trump campaign link with Russia’s hacking of e-mails in the 2016 election.

Facing criticism from legislators and a possible revolt in the Department, Barr ostensibly distanced himself from Trump on Thursday, chiding his boss for tweets which “make it impossible for me to do my job”.

But in a sign that his comments were for public cover while he continues to carry out Trump’s wishes, Barr has installed a group of outside lawyers to re-examine cases such as that of Flynn, who pleaded guilty in December 2017 to lying to the FBI.

The former head of the Defense Intelligence Agency, Flynn conferred with Russian Ambassador Sergey Kislyak in December 2016 about an incoming Trump Administration lifting sanctions — just imposed by President Barack Obama — on Moscow. He resigned as National Security Agency after only three weeks after his lying to the FBI was revealed.

Barr’s intervention raised the possibility of another overrule of prosecutors, even though the general’s sentencing has already been deferred several times with the prospect that he could be given probation rather than prison time.

Flynn’s defense lawyers, led by Sidney Powell, urged Barr to intervene. They claimed that the team of Special Counsel Robert Mueller, investigating Trump-Russia links, were corrupt. Last June, just before she officially became Flynn’s lawyer, Ms. Powell wrote to Barr with her “fervent hope that you and the Department of Justice will use this case to restore integrity and trust in the department”.

But multiple sources said Barr has responded by installing the outside lawyers at the start of February. They have begun questioning line prosecutors in the Washington office about various cases, including investigative steps and motives for prosecutorial actions.

Barr also put in place his personal aide Timothy Shea as interim US attorney in Washington after maneuvering to get Jessie Liu out of the position.

It was Shea who submitted the revised Justice Department filing over Roger Stone’s sentences. The four prosecutors immediately withdrew from the case, one resigning from the Department altogether.

Far from observing Twitter silence, Trump reasserted on Friday that he can and will manipulate justice, cloaking himself in a fictional “legl right” to direct the Justice Department.

“The President has never asked me to do anything in a criminal case.” A.G. Barr This doesn’t mean that I do not have, as President, the legal right to do so, I do, but I have so far chosen not to!

Trump suffered a setback on another front as the Justice Department said former Acting FBI Director Andrew McCabe will not be charged over an alleged leak of information.

Trump has vilified McCabe as a leader of a supposed “deep state coup”, amid a criminal investigation of almost two years.

But the Department wrote McCabe’s attorneys on Friday morning, “We consider the matter closed.” Prosecutors

Lawyers Michael Bromwich and David Schertler said in a statement:

We said at the outset of the criminal investigation, almost two years ago, that if the facts and the law determined the result, no charges would be brought. We are pleased that Andrew McCabe and his family can go on with their lives without this cloud hanging over them.

McCabe became Acting FBI Director in May 2017 after Trump fired James Comey in an effort to quash the Trump-Russia investigation.

The case centered on whether he made a false statement to the Justice Department’s Inspector General about a disclosure over an investigation into the Clinton Foundation.

In September, Judge Reggie Walton chastised prosecutors for stringing along McCabe. He said Trump’s comments created the appearance of a “banana republic”: “I don’t think people like the fact that you got somebody at the top basically trying to dictate whether somebody should be prosecuted.”