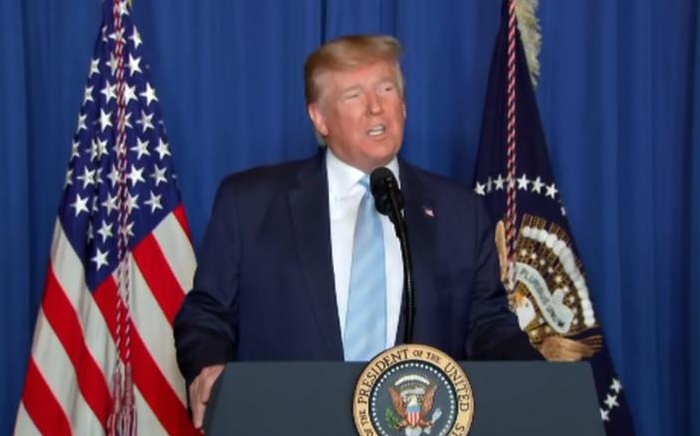 US media offer further clues on how American agencies, including the Pentagon, led Donald Trump to order the assassination of top Iranian general Qassem Soleimani, on Friday.

Soleimani, the head of the elite Quds Forces and Tehran’s key political and military operator in the Middle East, was killed by a US drone strike outside Baghdad International Airport.

See also EA on Monocle 24: A US-Iran Showdown After Assassination of Gen. Soleimani?
Iran Daily, Jan 4: Another US Airstrike on Tehran-Backed Iraqi Militia?

The assassination came amid a sustained effort by US agencies, after withdrawal from the 2015 nuclear deal between Iran and the 5+1 Powers (US, UK, France, Germany, China, and Russia), to contest Tehran in the Middle East as well as to apply “maximum pressure” inside the Islamic Republic through comprehensive sanctions. The Pentagon, intelligence agencies, and State Department have viewed Iran’s interventions and alliance in Syria, Iraq, Yemen, and the Lebanon as a challenge — a perception elevated by attacks on shipping in the Persian Gulf and Strait of Hormuz, through which 1/5th of the world’s oil passes, this spring and summer.

In contrast, Trump’s emphasis have been on a message to supporters that he will bring US troops home. He has pursued a photo opportunity meeting with Iran’s leaders, an effort rebuffed by the regime in September when President Rouhani refused a conference with Trump — via a speaker bringing Trump’s voice into a hotel conference room — on the sidelines of the UN General Assembly.

The tension between the agencies and the White House came out in June when Trump made a last-minute decision to halt US airstrikes inside Iran, following Tehran’s downing of an American drone. And in Syria, Trump’s order since December 2018 to withdraw all US troops has been checked by the Pentagon, with the support of other agencies, using the rationale that American forces must help protect oil and gas fields from the Islamic State.

The different approaches were on view between the lines of Trump’s statement on Friday. He repeatedly labeled Soleimani as a “terrorist” threatening US personnel, rather than an Iranian official. Trump asserted that the assassination would not stoke confrontation, saying it was to “stop war” rather than cause it. And he disowned any effort at “regime change” in Tehran.

The Pentagon instead focused on Soleimani as a key member of the Iranian regime, specifying his threat with “plans to attack American diplomats and service members in Iraq and throughout the region”.

Seizing Upon A Rocket Attack

The agencies’ plan was spurred by the 31-rocket attack on December 27 on a US position near the oil-rich city of Kirkuk in northern Iraq. An American contractor was killed and four US troops were injured, in addition to casualties among Iraqi security forces.

US officials blamed the Iran-supported militia Kata’ib Hezbollah and said the attack was one of a series on Americans, amid the contest between Washington and Tehran for influence Iraq.

On Sunday, Defense Secretary Mark Esper and Secretary of State Mike Pompeo, and the Chairman of the Joint Chiefs of Staff Mark Milley visited Trump at his Mar-a-Lago resort in Florida. They told Trump that Soleimani would soon be in Baghdad and — rather than noting that the general’s political and military role often brought him to the Iraqi capital — said the commander was taunting the US with the timing of the trip.

After the meeting, Pompeo told a press conference of US attacks on five Kata’ib Hezbollah sites — three in Iraq and two in Syria — that killed at least 25 fighters and wounded 51.

What we did was take a decisive response that makes clear what President Trump has said for months and months and months, which is that we will not stand for the Islamic Republic of Iran to take actions that put American men and women in jeopardy.

Esper pointed to further action, “We will take additional actions as necessary to ensure that we act in our own self-defense and we deter further bad behavior from militia groups or from Iran.”

The Decision to Assassinate

The officials began planning for Soleimani’s assassination, in calls convened by Vice President Mike Pence. Prodding Trump, they said Iran was taking advantage of his stand-down of US airstrikes in June: “If you don’t ever respond to them, they think they can get by with anything.”

The outcome, according to US officials, was that “Trump was…frustrated that the details of his internal deliberations had leaked out and felt he looked weak”.

Sen. Lindsay Graham, a close Trump friend, said after a meeting at Mar-a-Lago on Monday: “[Trump] was saying, ‘This guy [Soleimani] is a bad guy, he’s up to no good, we have to do something.’”

Trump began telling friends at Mar-a-Lago of a “big” operation that they would be hearing or reading about “soon”. He said he had been in close contact with his top national security and military advisors on the options.

On Tuesday, supporters of the Kata’ib Hezbollah militia raided the US Embassy compound in Baghdad. They broke windows, lit fires, and daubed graffiti on walls.

Advisors stoked Trump’s fear that the raid would be a sequel to the 2012 assault by protesters on the US Consulate in Benghazi, Libya, which killed four Americans including Ambassador Christopher Stevens.

Trump was now primed to act as officials continued to tell him that Soleimani was planning “imminent attacks directed at killing hundreds of Americans”. They said the Iranian general, then in Syria’s capital Damascus, was plotting attacks on other US embassies, consulates, and military installations.

Just before 5 pm on Thursday, Trump was summoned at Mar-a-Lago from a meeting about his 2020 re-election campaign. The video conference with his advisors culminated in the order to strike Soleimani

After the assassination, “senior administration official” tried to frame the operation as a Trump initiative from start to finish: “It was tremendously bold and even surprised many of us.”

But it was Pompeo who took the headlines, and tipped off the success in maneuvering Trump into the order to attack: “[Soleimani] was actively plotting in the region to take actions, the big action as he described it, that would have put dozens if not hundreds of American lives at risk. We know it was imminent.”