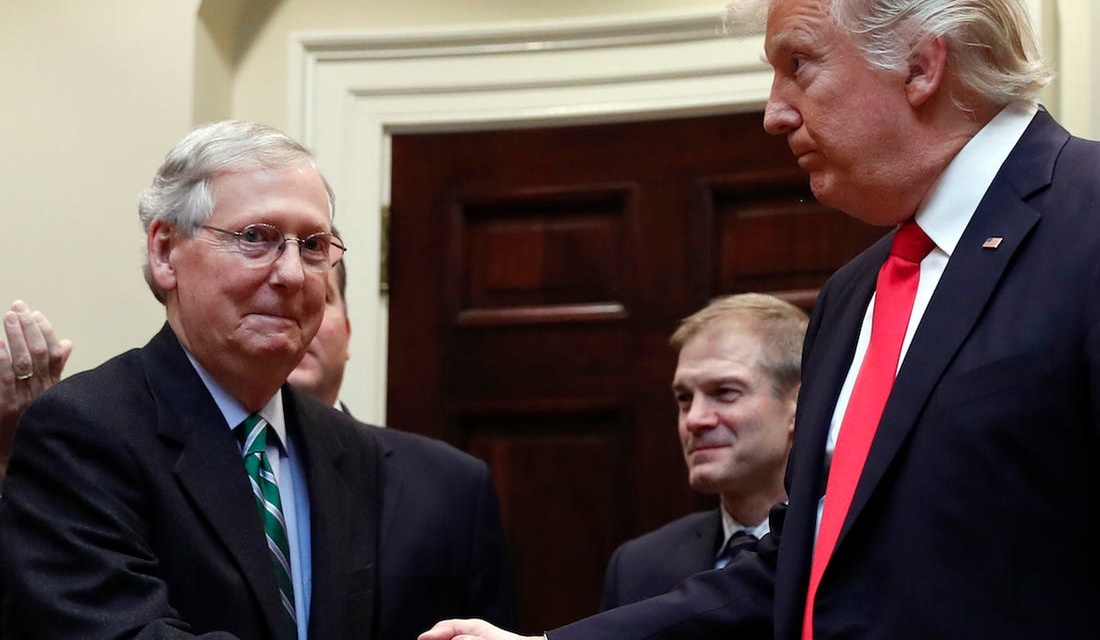 Senate Majority Leader Mitch McConnell has proposed a trial of Donald Trump, on charges of abuse of power and obstruction of justice, which allows no witnesses and documents — and no presentation of evidence already on the record without a majority vote by Senators.

McConnell submitted the rules for the trial on Monday, with a vote scheduled on them today. They limit each side’s arguments to 24 hours over two days. Senators would then pose questions to the House managers and Trump’s attorneys.

Only then would there would be a vote on witnesses or documents. And the House material on impeachment, leading to the adoption of the charges in December, will not be read into the record at the start of the trial.

McConnell said in December that he would not abide by the Constitutional obligation to be an “impartial juror” and would work with the White House for a quick process ensuring Trump was not convicted.

See also EA on Monocle 24 and talkRADIO: Will There Be A Real Trump Trial?; The Democrats Debate

That approach was on display on Monday. Hours before McConnell’s proposal, Trump’s lawyers filed a 110-page brief which avoided the evidence and instead declared that the articles of impeachment are invalid because they do not state any specific violation of the law: “The diluted standard asserted here would permanently weaken the presidency and forever alter the balance among the branches of government in a manner that offends the constitutional design established by the founders.”

The brief tried to counter the 104-page filing of House managers which, after setting out the evidence, said Trump’s actions and conduct were “a serious danger to our constitutional checks and balances” and “the framers’ worst nightmare”.

But the Trump defense ignored that the framers of the Constitution cited abuse of power as grounds for impeachment. Articles of impeachment against both Richard Nixon and Bill Clinton had accusations of such abuse. And Constitutional scholars have set down that impeachable offenses do not have to be specific violations of a criminal code, but can be violations of a President’s oath of office or offenses against the republic.

In addition, the Government Accountability Office found last week that Trump broke the law by withholding security assistance to Ukraine until it announced investigations to tarnish Presidential candidate Joe Biden and to cover up Russia’s involvement in the 2016 US election.

Newly-released documents and testimony of Lev Parnas, the central figure in the 10-month campaign by Trump and his personal attorney Rudy Giuliani for the investigation, add to the statements of 17 current and former US officials about the extent of the pressure.

Senate Minority Leader Chuck Schumer said of the proposed rules for the trial:

Four of the Senate’s 53 Republicans will have to defy McConnell and the White House to permit evidence and documents. While Senators Mitt Romney, Lisa Murkowski, Susan Collins, and Lamar Alexander have expressed concern, none have committed to a vote ensuring testimony is heard.

All four have first-hand knowledge of the 10-month campaign by Trump and his attorney Rudy Giuliani for Ukraine’s announcement of investigations. Bolton called the effort “a drug deal”, while the other three men implemented Trump’s suspension of security assistance.

The White House ordered Mulvaney, Blair, and Duffey not to comply with subpoenas by the House. The effort to prevent current and former US officials from testifying — resisted by the 17 who appeared in the impeachment hearings — led to the charge of obstruction of Congress against Trump.

McConnell’s maneuvers continue the obstruction in effect under the legal cover of the Majority Leader’s responsibility for agreeing the rules of the trial.

House managers noted in a Monday filing that Trump’s lawyers are arguing that “the American people are powerless to remove a president for corruptly using his office to cheat in the next election”.