Iran Daily: Tehran — We Will Patrol Persian Gulf Alongside Russia and China 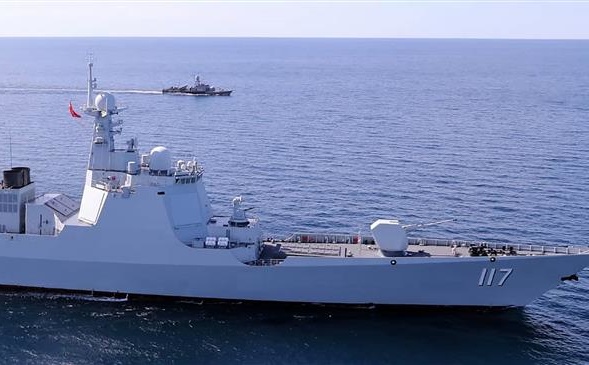 A Chinese destroyer during joint Iran-Russia-China naval drills in the Indian Ocean and Gulf of Oman, December 27, 2019

Foreign Minister Mohammad Javad Zarif has declared that Iran, joined by China and Russia, will be responsible for the security of the Strait of Hormuz and the Persian Gulf.

About 1/5th of the world’s oil passes through the waterway. Concern over shipping has been elevated this year by attacks on tankers. Western countries have blamed Iran’s Revolutionary Guards; the Islamic Republic has denied responsibility.

The US is attempting to form a coalition to protect shipping. Iran is insisting that it is responsible for the route — earlier this week President Hassan Rouhani visited Japan and urged Prime Minister Shinzo Abe not to participate in the American-led effort.

Zarif used joint naval drills with Russia and China in the Indian Ocean and the Sea of Oman to proclaim on Friday:

The joint maritime exercise, “Marine Security Belt”, will last four days in an area of 17,000 square kilometers. “Various tactical exercises” will include target practice and rescue of ships from assault and fires.