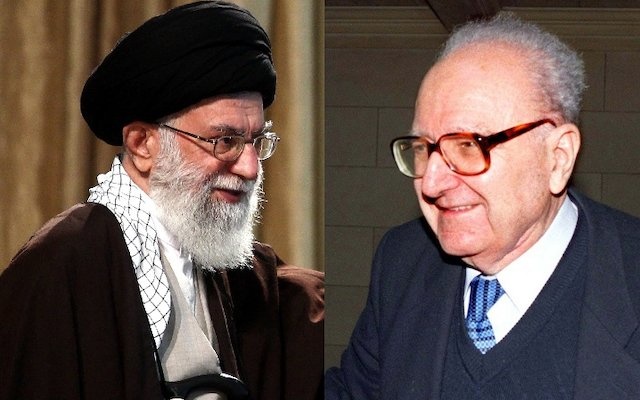 Iran’s Supreme Leader has used a Holocaust denier for his latest attack on the US.

Ayatollah Khamenei used the anniversary of the conviction of now-deceased French writer Roger Garaudy for his message on English- and French-language Twitter accounts.

#RogerGaraudy has an accurate and precise prediction about the U.S. regime, which we confirm, too.
We also believe that the U.S. is declining. A power built on the basis of coercion, interference in other countries’ affairs and domination over other nations won’t persist.

In his book The Founding Myths of Modern Israel, Garaudy said the killing of six million Jews before and during the Nazi occupation of Europe in World War II was a “myth”. The book was banned and Garaudy was fined 240,000 francs in 1998 for his Holocaust denial, a crime under French law.

The Supreme Leader did not explicit endorse the denial but tweeted: “Bravery and tirelessness of Roger #Garaudy in the work he initiated is praiseworthy. The fight he engaged in against the Zionists is a #DivineDuty for all those who respect the #Truth.”

In his book, #RogerGaraudy, the French philosopher, expressed doubts about the number of #Holocaust victims. The French govt not only banned his book, but also brought Garaudy to trial. These are the claimants of advocating #FreedomOfSpeech. pic.twitter.com/ErqmrrnC9V

Khamenei’s official website complemented the tweets with republication of a June 2016 article, “What Did Ayatollah Khamenei Tell Roger Garaudy about Jews?”

The article recounts the meeting between the Supreme Leader and the Holocaust denier in April 1998, eight months before the ruling of the French court.

Ayatollah Khamenei emphasized that,”Iran’s enmity against the U.S. and Zionism is based on logical Islamic principles; there is no racial and religious fanaticism ruling over the Iranian nation’s anti-US and anti-Zionist struggle. That is to say, if the U.S. was not arrogant and the Zionists didn’t commit such shameful crimes, we would not have taken such stances against them. We hold no prejudice and negativity against Jews; Jews are living peacefully and comfortably in Iran.

Khamenei continued, “The Zionists and the Nazis have a lot in common….The despicability of supporting Zionists is no less than that of supporting Nazi Germany or Hitler.”

Garaudy suppoerted the Supreme Leader, “The Zionists have all the levers of powers at hand in the US and American press, Radio, TV and cinema are all dominated by the Zionists. Thus I believe the US is currently a colony of Israel.”

A Tougher Line After Protests

But Khamenei has stepped up rhetoric against the US and Israel since last month’s mass protests against the Government’s announcement of a rise of 50% to 200% in petrol prices. He has insisted that the demonstrations turned to violence at the instigation of Washington, the Israelis, and Saudi Arabia.

Monday’s social media campaign by Khamenei’s office appears to be a balancing of the Supreme Leader’s speech on November 15, hours before the protests spread across Iran:

Amnesty International reported on Monday that at least 304 protesters were killed from November 15 to 18. The organization said thousands have been detained during and after the marches, with many facing abuse and torture.