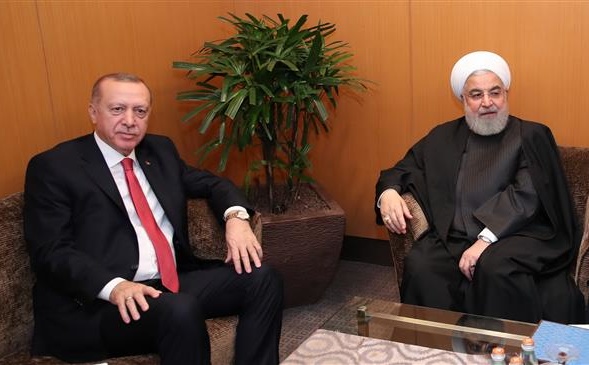 Iran’s President Hassan Rouhani has endorsed the conspiracy theory, pushed by Syria’s Assad regime, that the US is plotting to control Syrian oil reserves.

Amid a multi-sided contest over the future of northeast Syria — with much of it held by Kurdish groups — Rouhani made his remarks in a meeting with Turkish counterpart Recep Tayyip Erdoğan on Thursday, on the sidelines of a summit in Malaysia.

Rouhani said Tehran and Ankara, who have been on opposite sides during the 104-month Syrian conflict, should cooperate to block the supposed US attempt to control oil and gas fields.

The Kurdish-led, US-backed Syrian Democratic Forces guards the fields, reclaimed after the SDF pushed the Islamic State out of the northeast. A Kurdish authority claims autonomy in the Kobani and Cezire cantons.

Turkey considers the Kurdish militia YPG, the leading element in the SDF, as “terrorists” who are part of the Turkish Kurdish insurgency PKK.

The offensive took a strip between the towns of Ras al-Ain and Tel Abyad. On October 22, Erdoğan and Russian President Vladimir Putin declared joint military control of the zone, in which the Turkish President says he will resettle 1 million of the 3.6 million Syrian refugees in Turkey.

Rewriting the US Position

The Assad regime wants to retake control of the northeast and rejects Kurdish autonomy. Much of Syria’s oil and gas, amid an economy which has lost 75% of GDP during the conflict, is in the Kurdish-held area.

So Damascus has distorted a shift in US policy to push its conspiracy theory over oil.

Three days before the Turkish offensive, Donald Trump endorsed it in a phone call with Erdoğan. Trump ordered the withdrawal of all American personnel from northern Syria.

But the Pentagon wants to retain a presence in Syria, in part as a counter to Iran’s influence and to maintain a link with the Kurdish forces. So it tried to limit Trump’s command, telling the President that oil and gas fields — guarded by the SDF — must be kept out of the hands of ISIS.

The rationale worked in retaining 600 US troops, albeit outside Erdoğan’s zone. Defense Secretary Mark Esper also told legislators and a high-profile conference last week that Washington is not supporting Kurdish autonomy.

But the Assad regime, frustrated in its attempt to “regain every inch” of Syria, and its Russian backers spread the claim that the US was occupying the fields and selling oil.

The regime’s UN Ambassador Bashar al-Ja’afari made the declaration in an open session last month. On Monday, the regime outlet al-Ikhbariya TV portrayed the movement of US personnel as the “robbery” of the fields.

Earlier this week, Bashar al-Assad declared that the US Government was acting on behalf of “the money lobbies, whether in the form of oil, weapons, banks, or others”.