After the UK Election: No, It’s Not Smooth Sailing for A Johnson-Trump Relationship 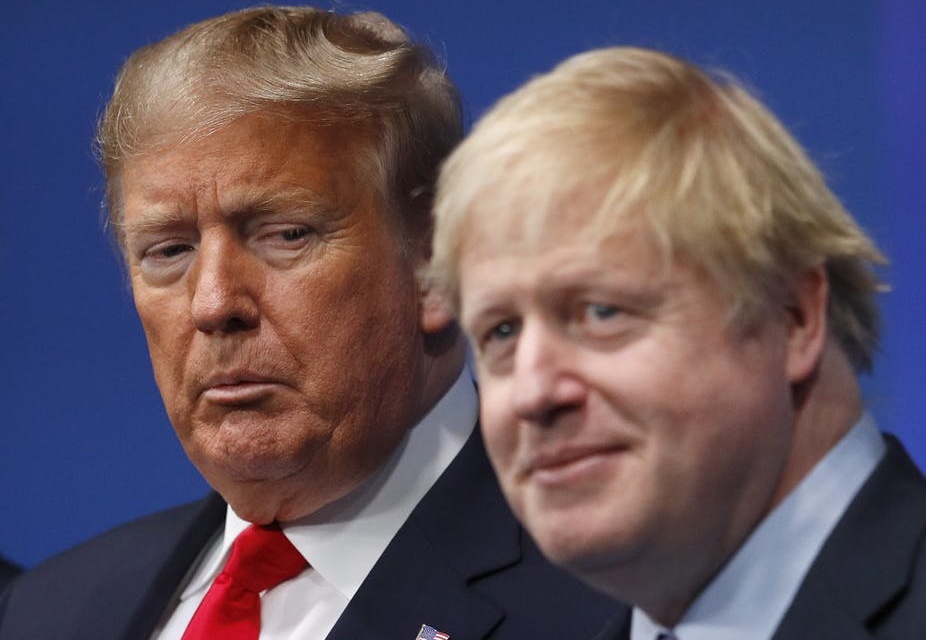 Boris Johnson has taken the scale of the UK Conservative Party’s election victory as an emphatic mandate to leave the European Union in 2020. But what of the implications of the vote for the UK-US relationship?

Despite enthusiastic tweets from President Donald Trump, the longer-term consequences of Johnson’s 80-seat majority for the “special relationship” may point in a different direction to the short-term lessons.

In the immediate aftermath of the election, the Trump White House will be relieved that it doesn’t have to deal with a Prime Minister Jeremy Corbyn, a man who has spent his life railing against American imperialism and opposing US foreign and security policies on almost all issues. For the rest of his tenure, whether re-elected or not, Trump can look forward to dealing with Johnson.

I have researched the US-UK relationship and how it has evolved under different presidencies. Although Corbyn was looked on with more suspicion by Trump, in practice, the UK’s departure from the EU is the more seismic disruption to transatlantic relations.

In the short term, Trump will see positive implications in the Conservative victory for his own re-election in November 2020. The defeat of big government socialism by populist nationalism will encourage Trump in the belief that he can repeat the success of the “Britain Trump”.

Corbyn’s defeat has also been seized upon in the Democratic leadership contest with presidential candidate Joe Biden warning: “Look what happens when the Labour Party moves so, so far to the left.” There are lessons to be drawn for both parties about the importance of embracing a leadership candidate who appears credible and popular to swing voters.

Trump will also be pleased that Britain will be leaving the EU, which he sees mainly as a competitor trading block rather than a promoter of liberal values and rules-based international order. What weakens the EU and its progressive agenda will be welcomed by Trump. For the “America First” president, however, Brexit is mainly seen as an opportunity to “strike a massive new trade deal” with “the potential to be far bigger and more lucrative than any deal that could be made with the EU”.

Congratulations to Boris Johnson on his great WIN! Britain and the United States will now be free to strike a massive new Trade Deal after BREXIT. This deal has the potential to be far bigger and more lucrative than any deal that could be made with the E.U. Celebrate Boris!

With the UK sending 45% of its exports of goods and services to the EU in 2018 as opposed to 19% to the US, this would represent quite a change in trade policy. For such a change to occur, a “clean break Brexit” is necessary where regulatory alignment with the EU ends so that trade policy could come into line with US food and manufacturing standards. This is the line that Nigel Farage and his Brexit Party advocate to accelerate the transition to such a US trade deal.

The scale of Johnson’s victory, however, means that he can now choose the Brexit he wants, unbeholden to the more extreme wing of his party represented by MPs from the European Research Group. Eager to hang on to the new coalition of working-class voters in the north and Midlands, Johnson may seek a Brexit deal with the EU that is less disruptive and damaging to existing trade policies than that advocated by Farage and Trump. Certainly, the extent to which any aspect of the health sector is opened up to the US market will be greatly scrutinized by the opposition and press. Under these circumstances, Trump may not get the deal he wants.

After the UK leaves the EU, the US will also miss its main source of influence in Brussels. The US Embassy in London is the largest in Europe because the UK is seen as the best way of persuading the EU to act in concert with Washington. It is through this link, for example, that the US has historically orchestrated common positions on sanctions policies and relations with Russia. With the UK out of the EU, the US will have less influence in Brussels and the UK will correspondingly be of less value to Washington.

Without the dissenting and cautionary voice of the UK in the EU, the block will also be free to pursue greater integration on defense and security and a more independent European voice in foreign and trade policies. The bridging role that London played in persuading the EU to take a common line with Washington on arms sales to China, or sanctions on Russia will not be easily replaced.

The role that the UK formerly played within Europe as a voice for liberal internationalism has now also been replaced with a government that is seen as a role model for populist nationalism in Europe. Rather than fulfilling a unifying role, post-Brexit Britain will add to the divisions within the west.

The UK’s ability to maintain its place as a veto-wielding permanent member of the UN Security Council will also be questioned once it leaves the EU. Having justified this position for the last 20 years because it represents, along with fellow permanent member France, 500 million Europeans, it will now be difficult to argue that its seat should be maintained to speak for Britain alone.

Trump can probably expect a more obsequious disposition from the UK towards the US as it pursues a new trading relationship with Washington. But future US administrations may come to regret the consequences of this election result and the Brexit that follows on their influence in Europe and the unity of the west in general.