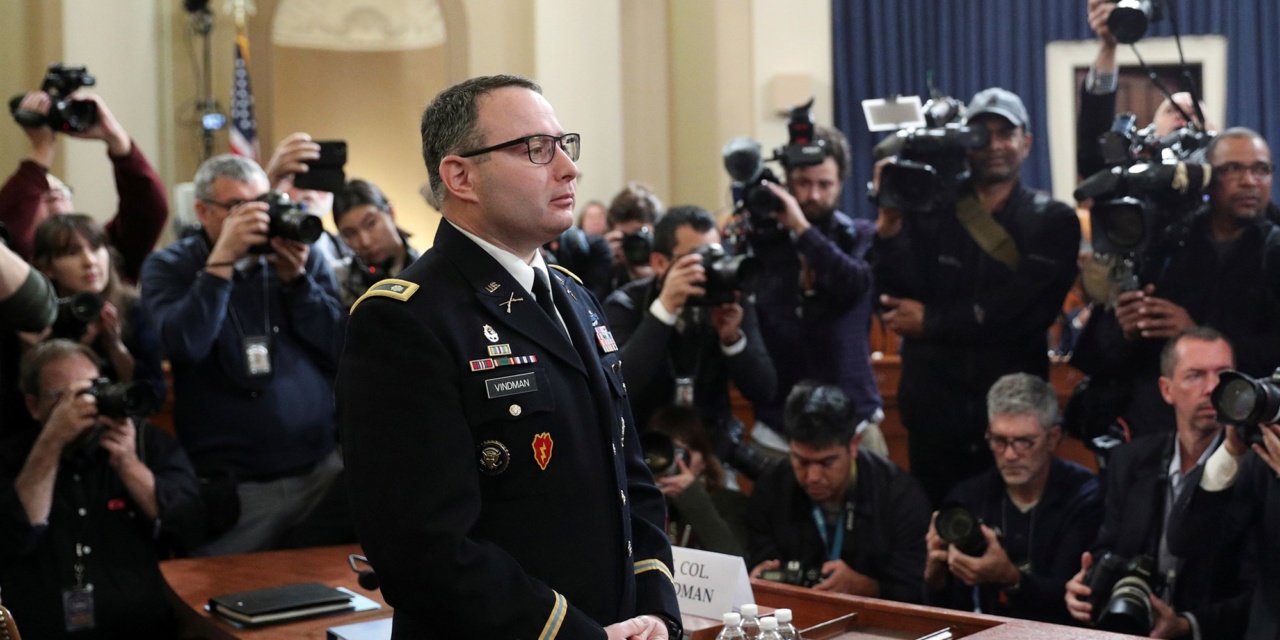 In a full day of testimony in the Trump impeachment hearings, four current and former US officials built the case of “unusual inappropriate” actions by Donald Trump and his attorney Rudy Giuliani, threatening US and Ukrainian national security in the pursuit of investigations of Trump’s political rivals.

The most compelling testimony came from National Security official Lt. Col. Alexander Vindman, who withstood attacks by Republican members of the House Intelligence Committee on his credibility and even his loyalty to the US.

Cautiously and sometimes nervously, but firmly, Vindman described his reaction as he listened to the July 25 call in which Trump — with an implied “quid pro quo” of military aid to Kyiv — repeatedly asked new Ukrainian President Volodymyr Zelenskiy for investigations to tarnish Presidential candidate Joe Biden and to cover up Russia’s interference in the 2016 US election.

“I couldn’t believe what I was hearing. It was probably an element of shock — that maybe, in certain regards, my worst fear of how our Ukraine policy could play out was playing out, and how this was likely to have significant implications for US national security.

Vindman set out a Trump “order” to Zelenskiy: “The power disparity between the two leaders…in order to get the White House meeting, President Zelenskiy would have to deliver these investigations.

He said of the Trump-Giuliani campaign from November 2018, “It certainly wasn’t helpful and it didn’t help advance national security interests.”

The depth of Vindman’s concern set off a real-time drama, with GOP legislators avoiding the detail of the evidence to accuse the Lieutenant Colonel — an Iraq War veteran who received the Purple Heart — of exaggerating his position, bypassing superiors, and supporting Ukraine rather than the US.

Vindman, in the military dress required of serving personnel testifying before Congress, anticipated the attacks in his opening statement. Having come to the US as a 3-year-old refugee from Ukraine, then in the Soviet Union, he noted that “offering public testimony involving the President” in that location and era “would surely cost me my life”.

He addressing his father, “Do not worry, I will be fine for telling the truth.”

When the ranking Republican on the committee, Rep. Devin Nunes, addressed him as “Mr Vindman”, the veteran politely but pointedly said, “Ranking member, it’s Lieutenant Colonel Vindman, please.” He knocked back questions that tried to portray his wearing of uniform as self-aggrandisement.

And he defused the GOP’s attempted surprise attack that he had been offered the post of Ukrainian Defense Minister, explaining that — as a US military officer — he immediately and repeatedly refused and reported the approach to NSC superiors.

In the headline moment of the morning, Vindman responded to Democratic Rep. Sean Patrick Maloney’s question about why he had told his father not to worry:

Congressman, because this is America. This is the country I served and defended, that all my brothers have served, and, here, right matters.

As Vindman testified, The White House tried to tear him down with a tweet that his judgement had been questioned by his immediate superior, the NSC’s Tim Morrison.

But Vindman countered GOP questioning by quoting from his glowing performance report, written by Fiona Hill, the NSC director for Russia and Eastern Europe. And in his afternoon testimony, Morrison pre-empted the Republican campaign by saying he would not criticize other officials — he merely said that he wished that Vindman had come to him, rather than the NSC’s legal counsel, over his concerns about the July 25 call.

Alongside Vindman, Jennifer Williams, a diplomat on Vice President Mike Pence’s national security staff, said that she found the call with Zelensky “unusual and inappropriate” as she listened to Trump. She said she was struck about Trump’s pressure on a foreign leader to intervene in a personal and domestic political matter.

In the afternoon, former US envoy to Ukraine and current senior NSC official Morrison — both summoned by Republicans, in hopes that they would undercut the damning testimony against Trump — refrained from direct criticism of Trump.

However, Morrison carefully said of the July 25 call, “I think we both agreed we wanted that more full-throated support of President Zelensky and his reform agenda, and we didn’t get it.” While not calling Trump’s actions illegal or improper, he said of the request for investigations, “It’s not what we recommend that the president discuss.”

Both men set out concerns over the activities of Trump’s attorney Giuliani. Volker said:

I don’t think that raising 2016 elections or Vice President Biden or these things I consider to be conspiracy theories that have been circulated by the Ukrainians…[were] things that we should be pursuing as part of our national security strategy with Ukraine. We should be supporting Ukraine’s democracy, reforms, its own fight against corruption domestically and the struggle against Russia and defense capabilities.

Volker, involved in the effort for a Zelenskiy statement of investigations, tried to distance himself from the Trump-Giuliani effort. He said that he did not know an investigation of Burisma — the Ukrainian gas company on which Joe Biden’s son Hunter was a board member — meant an investigation of the Bidens: “In retrospect, I should have seen that connection differently, and had I done so, I would have raised my own objection.” He said,
“I did not know of any linkage between the hold on security assistance and Ukraine pursuing investigations.”

But with his reference to conspiracy theories and his praise of Joe Biden as “an honorable man”, Volker removed the justification for the Trump-Giuliani effort.

That testimony not only dented GOP hopes but reinforced the morning’s accounts of Vindman and Williams, who spoke of the growing concern through the summer of Trump’s suspension of $391 million in military aid to Ukraine — a freeze ordered days before the call with Zelenskiy.

Williams spoke of a September meeting in which Zelenskiy told Vice President Pence of the consequences of the freeze, benefiting Russia in its military and political pressure on Kyiv.

She quoted Zelenskiy, “Any signal or sign that US support was wavering would be construed by Russia as potentially an opportunity for them to strengthen their own hand in Ukraine.”