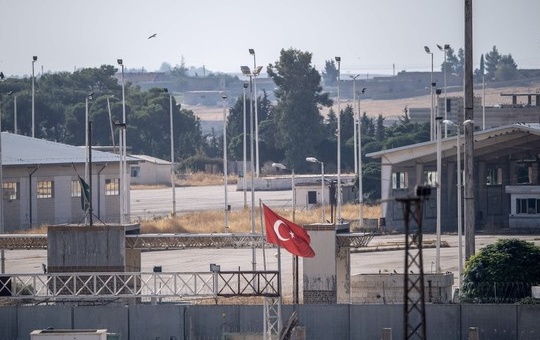 #OperationPeaceSpring will neutralize terror threats against Turkey and lead to the establishment of a safe zone, facilitating the return of Syrian refugees to their homes.

We will preserve Syria’s territorial integrity and liberate local communities from terrorists.

A CNN Turk journalist reported several large explosions in the town of Ras al-Ain, on the border across from the Turkish town of Ceylanpınar, as planes flew above. He said smoke was rising from buildings.

UPDATE 1300 GMT: The Assad regime has tried to take advantage of the changing situation in the northeast by obtaining Kurdish compliance to their political demands.

Deputy Foreign Minister Faisal al-Mikdad said Syrian Kurds should accept or be “plunged into the abyss”.

Talks between Kurdish groups and the Assad regime, encouraged by Russia, failed to advance this year because of the regime’s opposition to autonomy for Kurdish cantons.

…Or they can listen to their commanders, who say that they will fight the Turkish forces — in which case we will have no choice but to stop them from disrupting our counter-Islamic State efforts.

Ankara considers the Syrian Kurdistan Democratic Union Party (PYD) and its YPG militia as “terrorists” linked to the Turkish Kurdish insurgency PKK, which has fought Turkey’s security forces for 35 years. But the YPG are the leading element in the US-supported Syrian Democratic Forces, which have removed ISIS as a military presence in the northeast.

More than 70,000 ISIS fighters and their fighters are held in the al-Hol camp. About 70% of the residents are children.

On Sunday night, Donald Trump — during a phone call with Erdoğan — suddenly accepted Ankara’s military intervention in the northeast, threatened by the Turkish President for weeks. There are signs that the Pentagon and State Department are pushing back, as they did last December after Trump ordered the withdrawal of all US forces from Syria, leaving US policy and the situation in the northeast in confusion.

EA on BBC and Radio FM4: Trump Throws US Policy on Syria Into Turmoil

Significantly, Altun declared Ankara’s intentions to a US audience, in a column for The Washington Post: “The Turkish military, together with the Free Syrian Army, will cross the Turkish-Syrian border shortly.”

He expanded Erdoğan’s plan to move 2 million of the 3.6 million Syrian refugees in Turkey into a “safe zone” along 480 km (270 miles) of the Syrian-Turkish border, and 30 km (19 miles) deep into the Kurdish cantons of Kobani and Cezire.

Most of the refugees are Arabs, raising concerns of conflict with the Kurdish administrations who have declared autonomy in their cantons.

Turkey Will “Take the Lead”

A White House spokesman said that, despite criticism from Republican legislators and pushback from US agencies over Trump’s decision, Erdoğan will visit Washington on November 13.

Playing to Trump’s insistence that he has overseen the defeat of the Islamic State and Sunday night’s White House statement that supervision of camps harmed the US taxpayer, Altun ignored the Kurdish dimension and wrote, “America has borne the brunt of the counter-Islamic State campaign for too long. Turkey, which has NATO’s second-largest army, is willing and able to take the lead now and drive it home, bringing millions of refugees back to Syria in the process.”

On Tuesday, the Pentagon implicitly hit back at Trump’s acceptance of Turkish plans but appeared to concede that it cannot stop the cross-border operations.

“Unfortunately, Turkey has chosen to act unilaterally. As a result we have moved the US forces in northern Syria out of the path of potential Turkish incursion to ensure their safety,” spokesman Jonathan Hoffman said.

The outlet Daily Sabah, linked to the Erdoğan Government, was more honest about Turkey’s objectives with its headlines, “For the PKK in Syria, The End is Here” and “Turkish Military to Save East of Euphrates from YPG Terrorists”.