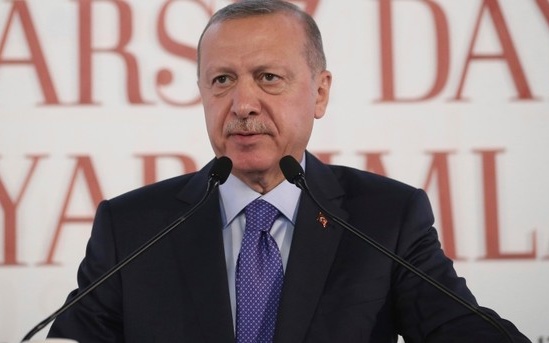 Turkey’s President Recep Tayyip Erdoğan has threatened the resumption of attacks on mainly-Kurdish areas of northeast Syria, saying a Turkish-rebel offensive will “crush the heads of terrorists” if the Kurdish YPG militia does not withdraw.

Erdoğan obtained US agreement on Thursday to an ultimatum to the YPG to depart and give their heavy weapons, many of them supplied by the Americans to fight the Islamic State. In return, Turkey announced a five-day pause in attacks.

Ankara is seeking to take control of a 480-km (270-mile) long, 30-km (19-mile) deep zone along the Turkish-Syrian border, extending east across the Euphrates River to Iraq. The area covers part of the Kurdish cantons of Kobani and Cezire.

The Turkish President has said that up to 2 million of the 3.6 million Syrian refugees in Turkey will be resettled in the territory.

If it works, it works. If not, we will continue to crush the heads of the terrorists the minute the 120 hours are over.

If the promises that were made to us are not kept, we will not wait like we did before and we will continue the operation where it left off once the time we set has run out.

Defense Minister Hulusi Akar echoed, “We paused the operation for five days. In this time, the terrorists will withdraw from the safe zone, their weapons will be collected, and positions destroyed. If this doesn’t happen, we will continue the operation.”

Ankara considers the YPG and the Syrian Kurdistan Democratic Union Party (PYD) to be part of the Turkish Kurdish insurgency PKK. But the YPG is the leading element in the Syrian Democratic Forces, supported by the US to remove the Islamic State from northeast Syria.

Reuters journalists reported only a few Turkish military vehicles crossing the border on Saturday. The Turkish Defense Ministry claimed 14 “provocative attacks” from within Syria, and said it was coordinating closely with the US military over the border area.

The Turkish President has accepted an invitation from Russian counterpart Vladimir Putin for talks in the southern Russian resort of Sochi next week.

Erdoğan told supporters in the Saturday rally, “In certain parts of our operation area, regime forces under Russian protection are situated. We will discuss this issue with Mr Putin. We need to find a solution”