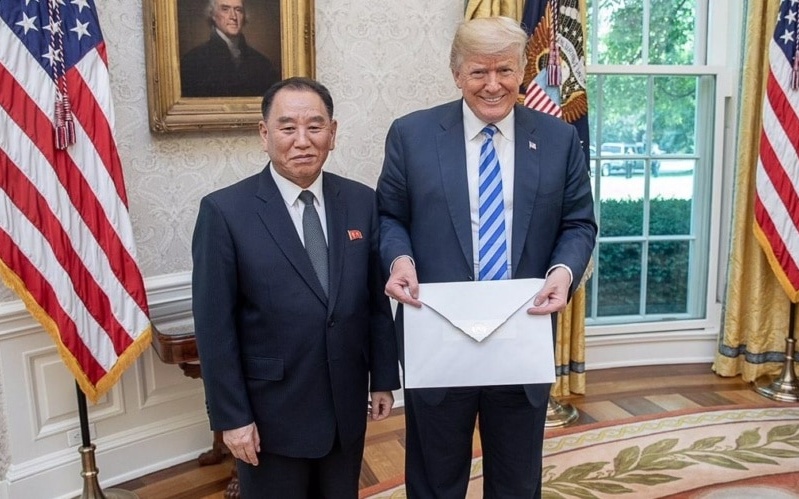 Pushing aside US military concerns, Trump declared that Kim had sent him a long letter with “a small apology for testing the short range missiles”. But he went farther by lashing out at South Korea:

….also a small apology for testing the short range missiles, and that this testing would stop when the exercises end. I look forward to seeing Kim Jong Un in the not too distant future! A nuclear free North Korea will lead to one of the most successful countries in the world!

Trump has long assailed the cost of the joint US-South Korean exercises, part of his litany that American allies such as NATO and Japan are exploiting US by taking money in defense agreements.

Immediately after his first, historic summit with Kim in June 2018, Trump said he would halt the joint exercises, held since 1955, 16 months after the end of the Korea War. The Pentagon held out against the impulsive statement, and exercises resumed in November 2018, albeit on a smaller scale than usual. They were conducted again after the failure of Trump’s second summit with Kim in February, and drills are scheduled this month.

North Korea has justified its firing of missiles as a response to the US-South Korean exercises and Seoul’s purchase of F-35A stealth fighters. There have been four test in the past two weeks.

North Korea has used the tactics of letters to Trump to pull him back from military action and to try and ease US and international sanctions.

In the months after Trump promised “fire and fury” and derided Kim as “Little Rocket Man” in 2017, Pyongyang sent flattering messages. They culminated in early June with an extra-large letter, conveyed by Kim’s senior advisor Kim Young Chol, inviting Trump to a summit.

The summits have brought no movement on the issue of North Korea’s nuclear weapons. The first in Singapore yielded the photo opportunity of Trump and Kim signing a general statement about “denuclearization” of the Korean Peninsula, repeating North Korea’s line since the 1990s. The second in Vietnam ended with Kim’s sudden walkout, leaving Trump alone in the summit hotel.

US intelligence services have assessed that North Korea has made no significant changes over its nuclear weapons and missiles, provoking Trump’s anger. In part because of the clash, Director of National Intelligence Dan Coates resigned last month, and Trump has blocked his succession by Deputy Director Sue Gordon, forcing her departure last week.

Last weekend, Trump renewed his praise of “his friend” Kim:

….Chariman Kim has a great and beautiful vision for his country, and only the United States, with me as President, can make that vision come true. He will do the right thing because he is far too smart not to, and he does not want to disappoint his friend, President Trump!