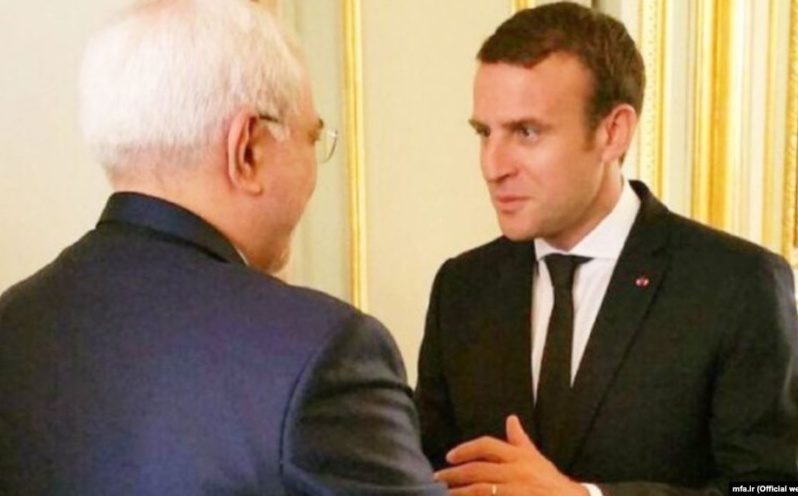 Zarif said on Friday after talks in Paris,

France has offered proposals to Iran about ways to implement the JCPOA [the Joint Comprehensive Plan of Action] and steps that the sides are required….

We believe they are moving in the right direction, although we are not definitely there yet.

Macron has renewed his attempt from last month to defuse US-Iran tensions, after Tehran suspended some commitments under the 2015 agreement with the 5+1 Powers (US, UK, France, Germany, China, and Russia).

The French President intervened after Iran — in the face of the American withdrawal from the JCPOA and comprehensive US sanctions from November — broke the limit on stocks of its 3.67% uranium, pushed enrichment to 4.5%, and said it will consider resumption of its pre-2015 enrichment of 20% grade fuel.

Macron was also prompted to mediate between Washington and Tehran because of attacks and detentions of tankers in the Persian Gulf and Strait of Hormuz and the downing of drones, which led Donald Trump to consider US airstrikes inside Iran.

Zarif said on Friday, without giving details, that Iran has presented proposals so that the JCPOA will be implemented completely.

In phone conversations with Macron, President Hassan Rouhani has said Iran will return to its commitments under the deal if the US eases sanctions.

Tehran began its suspension of the commitments after negotiations failed for a vital link with Europe to prop up the troubled Iranian economy.

In February the European Union launched a limited mechanism, INSTEX, to bypass the US sanctions with trade in Iranian oil and other commodities and goods. Iran rejected the initiative, claiming “humiliating conditions”: the EU’s pursuit of negotiations over Tehran’s missile program, and its criticism of Iranian activities in the Middle East and alleged involvement in bomb and assassination plots in Europe.

Zarif said the outcome of his meeting with Macron depends on the European Union’s efforts to “fulfil its obligations under the JCPOA after the US withdrawal”.

He added, “We will continue talks. Contacts between Macron and Rouhani will be continued.”