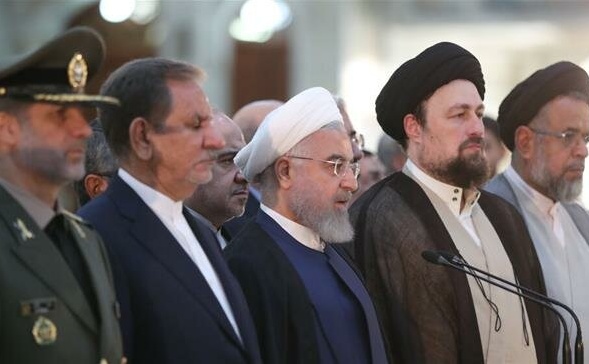 Facing an economy crippled by long-term issues and US sanctions, Iran’s President Hassan Rouhani has called for national unity.

Rouhani said at a ceremony at the mausoleum of Ayatollah Khomeini, the founder of the Islamic republic, “Without doubt we will get through this historic chapter through unity between the government and the people.”

Referring to the comprehensive US sanctions imposed last Novamber and tightened this spring and summer, Rouhani proclaimed:

Unity, endeavor and resistance is what will render the enemy hopeless….The enemy’s loss of hope is our great objective. For our nation to gain hope in its future is, however, another and more important goal. As long as this hope endures, this path will also be carried on.

He derided the Trump Administration as an “amateur” government creating trouble for the people of Iran, the region, and the US.

Iran has had long-standing issues with productivity, investment, trade, employment, and a historically weak currency; however, the US sanctions have compounded the threat with the attempt to reduce oil exports to zero.

The Islamic Republic may be moving more oil on the gray and black markets, with tankers turning off their GPS transponders to avoid tracking. However, the effort was challenged last month with the impoundment of the Iranian supertanker Adrian Darya 1 off the coast of Gibraltar, as it allegedly tried to deliver 2.1 million barrels of oil to Syria’s Assad regime.

Yesterday Rouhani grasped at the claim, “A recent bimonthly report along with statistics released yesterday by the Statistical Center of Iran reported that monthly inflation has decreased compared to previous months.”

In its initial years, the Government brought inflation down to single digits from the 40% rate it inherited in August 2013; however, the level has risen to more than 50% this year.