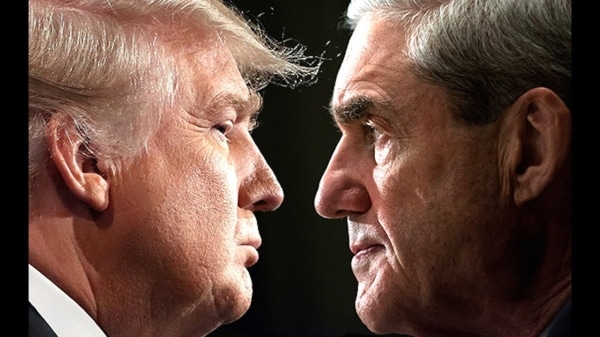 Donald Trump tips off his frustration and worry, via Twitter, over Wednesday’s testimony by Special Counsel Robert Mueller to two Congressional committees about Trump-Russia links.

Trump began Tuesday by retweeting the insistence of Fox TV host Trish Reegan about the 448-page Mueller Report, which found “numerous contacts” between the Trump camp and Russian officials and evidence for multiple obstructions of justice by Trump: “There is no there there. NO THERE THERE! We completely wasted everybody’s time and taxpayer’s money.”

His mood darkened when he learned that Mueller’s longtime deputy Aaron Zebley will also be at the public hearings of the House Judiciary and Intelligence Committees.

Just got back only to hear of a last minute change allowing a Never Trumper attorney to help Robert Mueller with his testimony before Congress tomorrow. What a disgrace to our system. Never heard of this before. VERY UNFAIR, SHOULD NOT BE ALLOWED. A rigged Witch Hunt!

Zebley was Chief of Staff when Mueller was FBI Director from 2001 to 2013, and he had the same role in the Special Counsel’s office. He and another deputy, James Quarles, have helped Mueller prepare for his testimony.

There is no evidence that Zebley has ever expressed political opposition to Trump. He has no history of donations to campaigns.

The Justice Department is objecting to any testimony by Zebley.

On Monday the Department led by Trump’s ally Attorney General William Barr, wrote Mueller on Monday that he “must remain within the boundaries” of the report, published with redactions in April. The Special Counsel was told that he cannot “discuss the conduct of uncharged third parties”, such as Trump, his family, and his closest business and personal associates. Mueller also must not discuss “the redacted portions of the public version” of his report.

In a May 29 news conference, his only appearance about his team’s 23-month investigation, Mueller said, “The report is my testimony.”

But House Democrats believe that, just by reiterating and amplifying passages in the report, Mueller can highlight Trump’s possible “high crimes and misdemeanors” for those who have not read the document.

Republicans are hoping to avoid the substance of the report by attacking Mueller’s team and the FBI as biased.

See EA on CNN: Previewing Mueller Testimony to Congress on Trump-Russia and Obstruction of Justice

Pursuing those tactics, Trump lied six times in 90 seconds about Mueller and his investigation during a Tuesday press conference with visiting Pakistani Prime Minister Imran Khan.

Trump falsely said that the report found no collusion, no obstruction, and “no nothing”. He wrongly saying the Special Counsel had conflicts of interest, that Mueller wanted to become FBI Director after Trump — in an attempt to quash the Russia investigation — fired James Comey in May 2017, and that he and Mueller had a “business relationship”.

So Robert Mueller has now asked for his long time Never Trumper lawyer to sit beside him and help with answers. What’s this all about? His lawyer represented the “basement server guy” who got off free in the Crooked Hillary case. This should NOT be allowed. Rigged Witch Hunt!