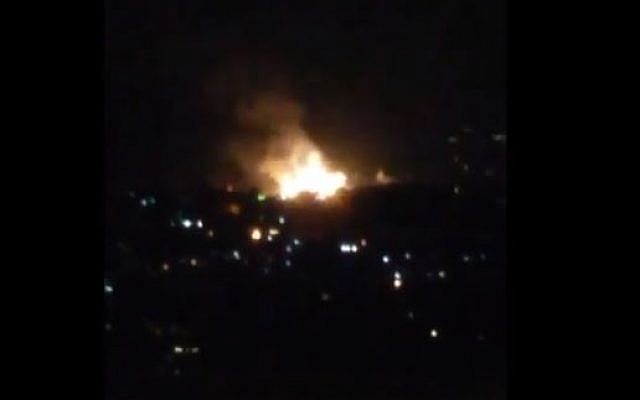 Israel has carried out more airstrikes on pro-Assad positions in Syria, targeting sites near Homs and the capital Damascus, according to multiple reports.

Following usual practice, the Israel Defense Forces refused to comment. However, Assad regime media claimed at least four civilians, including a baby, were killed and 21 wounded.

Syrian State news agency SANA also issued the standard claim that air defenses had downed a number of the missiles.

The Israelis struck at least 10 targets near Damascus, including the 91st Brigade base with Iranian Revolutionary Guards, the warehouses and ammunition depots of the regime’s Mezzeh base south of the capital, and a branch of the Syrian Scientific Studies and Research Center — which specializes in chemical weapons development — in Jamraya, 10 km (7 miles) northwest of Damascus.

SANA claimed the civilian victims were in Sahnaya, a neighborhood only a few hundreds yards away from the Mezzeh base. An EA source in the area said four of his neighbours were killed.

The strikes were the first on regime and Iranian positions since the start of June.

Israel has carried out hundreds of airstrikes against Assad regime, Iranian, and Hezbollah targets during Syria’s eight-year conflict. The attacks initially focused on Iranian transfers of weapons and missiles to Hezbollah and on the movement of Iranian and Hezbollah personnel to southwest Syria near the Israeli-occupied Golan Heights. In the past year, with Netanyahu demanding Iranian military withdrawal from Syria, Israel expanded the raids to targets Assad regime bases with Iranian personnel throughout the country.

In January, Israel fired missiles on the al-Kisweh base with Iranian forces, a warehouse at Damascus International Airport, and Iranian targets across southern Syria. On March 27, the Israelis attacked a base with Iranian personnel near Aleppo. And in mid-April, they struck a complex near Maysaf, connected to the regime’s chemical weapons program and reportedly with an Iranian presence.