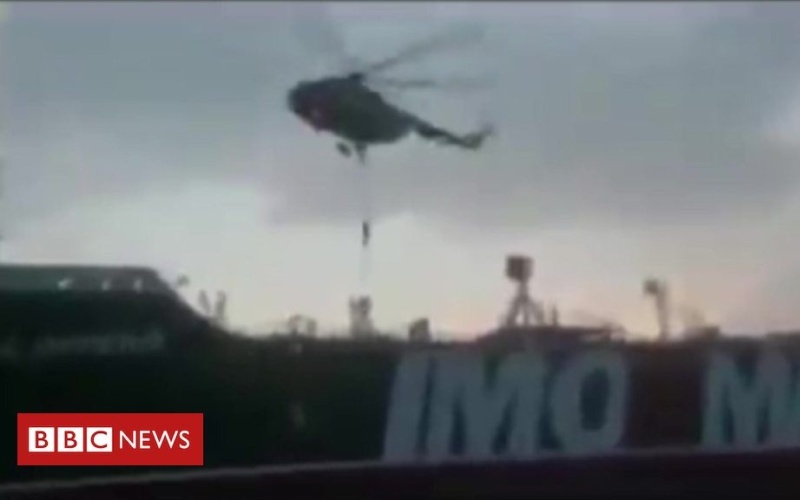 The UK has rejected a tanker swap with Iran, releasing an impounded Iranian supertanker in exchange for a British-flagged vessel seized by Revolutionary Guards in the Strait of Hormuz.

“There is no quid pro quo,” Foreign Secretary Dominic Raab told the BBC. “This is not about some kind of barter. This is about the international law and the rules of the international legal system being upheld and that is what we will insist on.”

UK Marines and Gibraltarian police boarded the Iranian supertanker Grace 1, carrying 2.1 million barrels of oil, in Gibraltar’s waters on July 4. The UK said the ship was breaking European Union sanctions on oil deliveries to Syria’s Assad regime. The Revolutionary Guards denied the vessel was heading to the Syrian port of Baniyas on the eastern Mediterranean.

Iran’s Supreme Leader and military commanders vowed retaliation for the “UK piracy”. The Revolutionary Guards were deterred a week later from intercepting the tanker British Heritage when the Royal Navy frigate HMS Montrose intervened. But on July 19, the Guards boarded the Swedish-owned Stena Impero, which was en route to Saudi Arabia to collect oil. The tanker was taken to the southern Iranian port of Bandar Abbas, where some of the crew are still detained.

Last week the UK Government instructed the Royal Navy to escort UK-flagged ships through the Strait of Hormuz, which carries 1/6th of the world’s oil. HMS Montrose conducted the first mission overnight on Wednesday into Thursday.

Iran said Sunday talks with the remaining parties in the 2015 nuclear deal — the UK, France, Germany, China, and Russia — were “constructive”.

The emergency discussions in Vienna were convened after tensions spiked between Iran and the US, which has withdrawn from the deal and imposed comprehensive sanctions, and between Tehran and London.

“The atmosphere was constructive. Discussions were good. I cannot say that we resolved everything, I can say there are lots of commitments,” said Iranian Deputy Foreign Minister Abbas Araqchi.

But Iran also highlighted its threat to reduce more commitments under the deal, unless Europe provides a vital link to bypass the US sanctions and prop up Tehran’s troubled economy.

The head of the Atomic Energy Organization, Ali Akbar Salehi, told lawmakers on Sunday that Iran will restart construction of the Arak heavy water nuclear reactor.

Under the 2015 agreement, construction of Arak was halted pending a redesign to reduce the by-product of plutonium, which can be used in a military nuclear program.

Earlier this month, Iran breached the limit both on stock and on level of enriched uranium. It exceeded the 200-kg (440-pound) maximum on 3.67% uranium and raised purity to 4.5%.

Iran is still well short of the 20% uranium it produced before 2015, but officials have said they can quickly return to that level. The 20% fuel can be further enriched to 90% for military use.

Foreign Office spokesman Abbas Mousavi said on Monday that Tehran will not hesitate to take a “third step” to suspend commitments.

“We are still waiting for the Europeans’ practical and concrete steps in implementing the JCPOA [Joint Comprehensive Plan of Action],” he told reporters.

Despite his upbeat summary of “constructive” talks, Araqchi said in Vienna, “We will continue to reduce our commitments to the deal until Europeans secure Iran’s interests under the deal.”