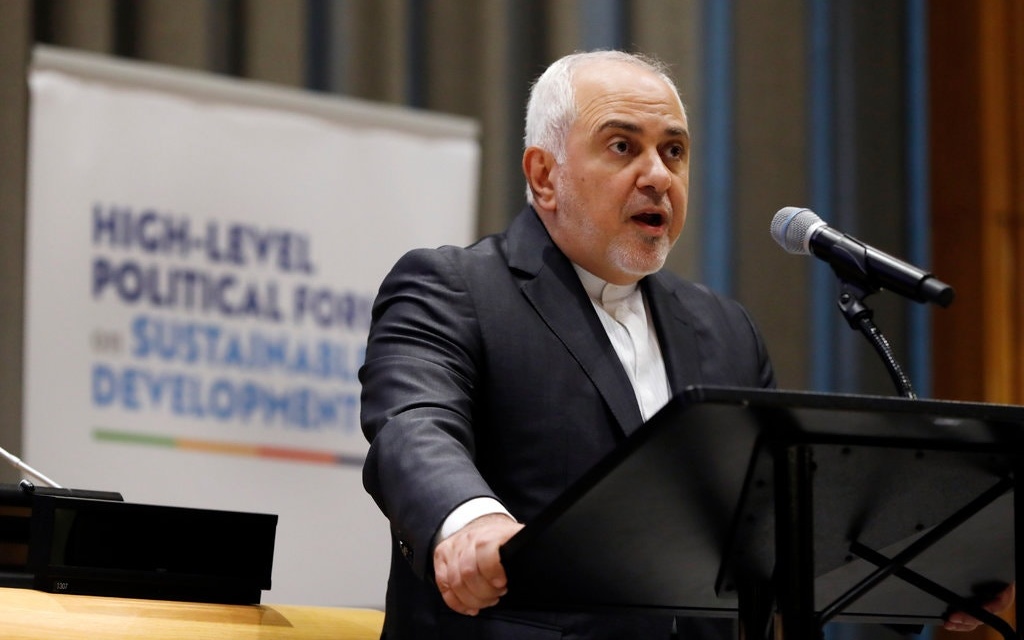 Iranian Foreign Minister Mohammad Javad Zarif has offered a revised nuclear deal with the 5+1 Powers, including the US — but the initiative was immediately overtaken by Donald Trump’s claim that an American warship shot down an Iranian drone in the Persian Gulf.

On a diplomatic tour of New York, Zarif said Iran will formally and permanently accept enhanced inspections of its nuclear program, in return for the permanent lifting of US sanctions.

He told reporters at the Iranian mission to the UN:

It’s not about photo ops. We are interested in substance. There are other substantial moves that can be made.

Trump, seeing the July 2015 nuclear deal as part of predecessor Barack Obama’s legacy, withdrew the US last May. In a campaign of “maximum pressure” to break Iran’s economy, comprehensive sanctions were imposed in November and tightened this spring, as Tehran’s official oil exports fell 60%.

But Trump has been inconsistent over the approach, wanting face-to-face appearances with Iran’s leaders. He said he would give phone numbers to Tehran, and sent a message to the Supreme Leader through visiting Japanese Prime Minister Shinzo Abe last month.

Tehran scoffed at the phone number offer, and the Supreme Leader bluntly refused to accept the message from Abe. Ayatollah Khamenei — reworking Ayatollah Khomeini’s “chalice of poison” in accepting a settlement of the 1980-1988 Iran-Iraq War — said he would not give in to “poisonous” talks with Washington.

However, Zarif sought an opening yesterday by crediting Trump for a U-turn that called off US airstrikes within Iran last month, following the Revolutionary Guards’ downing of an American surveillance drone.

The Foreign Minister said Trump’s veto of the strikes gave him confidence that diplomatic progress is possible:

I believe we were few minutes away from a war. Prudence prevailed and we’re not fighting. So that gives reason for us to be optimists.

Tanker Seizure and Dispute Over Drone

Zarif’s announcement was quickly lost in a rush of events around the possible US-Iran military confrontation in the Persian Gulf.

Early Thursday, Iran confirmed that it seized a foreign-owned vessel and the 12 crew, accusing them of smuggling one million liters of oil out of the Islamic Republic. Authorities did not name the vessel, but Iran’s State media showed footage of speedboats circling around the Panama-flagged, UAE-based Riah tanker last weekend.

Zarif tried to play down the development, amid claims that he has been overtaken by the Revolutionary Guards:

It’s not a tanker. It’s a small ship carrying a million litres, not a million barrels, of oil. We do it every other day. These are people who are smuggling our fuel.

In the afternoon, Trump read a statement that the USS Boxer downed the Iranian drone when it came within 1000 yards and did not heed repeated warnings:

The drone was immediately destroyed. This is the latest of many provocative and hostile actions by Iran against vessels operating in international waters. The United States reserves the right to defend our personnel, facilities, and interests.

We have not lost any drone in the Strait of Hormuz nor anywhere else. I am worried that USS Boxer has shot down their own UAS by mistake!

The Iranian military said all its drones returned safely to their bases, denying any confrontation with a US warship.