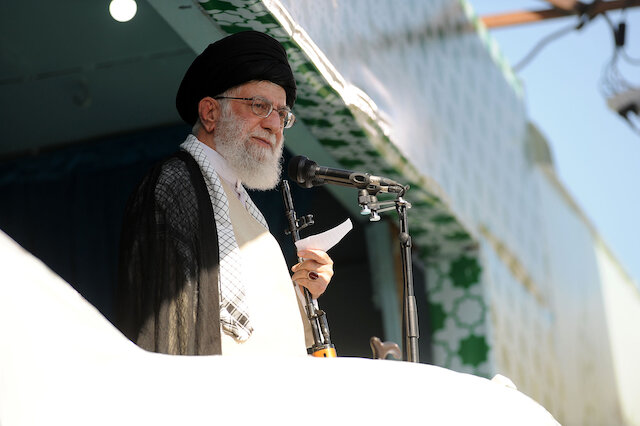 Trying to bolster public support in Iran’s conflict with the Trump Administration, the Supreme Leader has used the issue of Palestine in an address at the end of Ramadan.

He mocked the promotion of Kushner’s “Deal of the Century” with a jab at America’s Arab allies.

The “Deal of the Century” is a major act of treason against the World of Islam. We thank Muslim & Arab countries & Palestinian groups that opposed the deal. We hope Bahraini & Saudi rulers will understand what a quagmire they’re stepping into & how harmful it will be for them.

Bahrain is hosting a conference this month where Kushner is planning to launch his
proposal.

The objective of this conference is to materialize America’s wrongful, treacherous and evil scheme for Palestinians….However, this will not happen, and this plot will never get off the ground, by divine grace.

Kushner’s plan is likely to follow the long-held path of Israeli Prime Minister Benjamin Netanyahu for an emphasis on economic initiatives, setting aside the Palestinian pursuit of statehood, an end to the Israeli military presence, and withdrawal of Israel-backed settlements in the West Bank.

In an interview with Axios, the White House advisor dismissed the objections of Palestinian leaders, insisting that people in the West Bank and Gaza will “make a determination: Do they think this will allow them to have a pathway to a better life or not?”

Iran’s proposal is a referendum by Muslim, Christian & Jewish residents of #Palestine & Palestinian refugees on governing system. Till then, Resistance should continue; by God’s grace Palestinians will be victorious; youth will see the day Palestine is returned to Palestinians.