Iran Daily: Parliament Speaker — US May Have Attacked Tankers 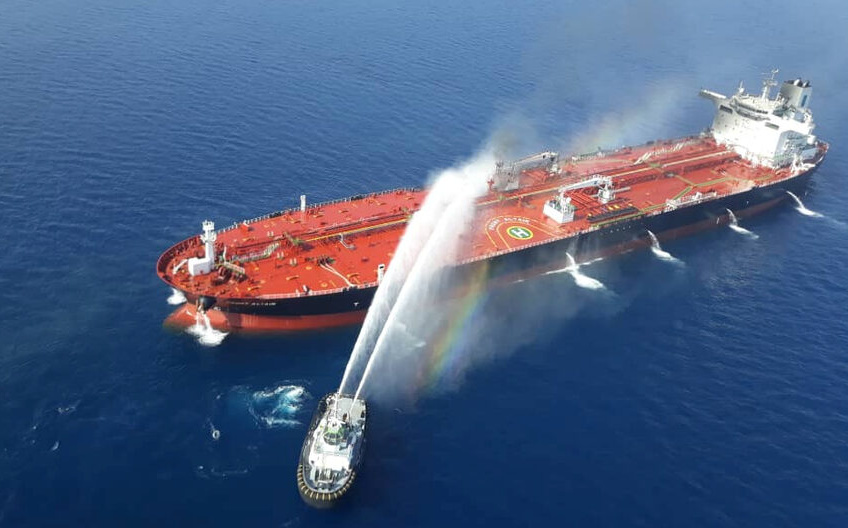 An Iranian navy boat tries to stop fire on one of two tankers attacked in the Gulf of Oman, June 13, 2019 (Tasnim/Reuters)

UPDATE 1230 GMT: Iran has moved forward the date for an increase in its production of low-grade enriched uranium, breaking terms in the 2015 nuclear deal.

The spokesman for the Atomic Energy Organization, Behrouz Kamalvandi, says Iran may resume the generation of 3.67% uranium in the next 10 days.

In May, Iranian officials including President Hassan Rouhani gave a deadline of July 7 for foreign powers to provide economic links and political support to bypass US sanctions. Rouhani said on Saturday, “The Islamic Republic of Iran has decided to reduce its commitments…to restore balance to the agreement while being ready for any interaction.”

The low-grade uranium cannot be used for military purposes. However, it can be further enriched to 20% — the position which Iran reached by 2015 — and then again to the more than 90% needed for a nuclear weapons

Under the 2015 agreement, Iran agreed to end all production of 20% uranium, shipping stocks outside the country, and to restrict its holdings of 3.67% uranium to 300 kg (600 pounds).

During a meeting with France’s Ambassador Philippe Thiébaud, Rouhani said, “The current situation is very critical and France and the other parties…still have a very limited opportunity to play their historic role for saving the deal.”

Kamalvandi, said, “As soon as [the Europeans] carry out their commitments, things will naturally go back to their original state.”

But he expressed pessimism that Iran will be satisfied with the terms of any agreement for economic ties:

The Europeans have expressed indirectly their inability to act.

There is still time for European countries, but if they want more time it means that they either can’t or don’t want to honor their obligations. They should not think that after 60 days (deadline set in May by Iran), they will have another 60-day opportunity.

The European Union launched a limited Special Purpose Vehicle in February, but Iran rejected the mechanism, known as INSTEX, because of “humiliating conditions” — the EU’s concern over Tehran’s missile program, its activities in the region, and alleged bomb and assassination plots in Europe.

Iran’s Parliament Speaker Ali Larijani has tried to blame the US for last Thursday’s attacks on two tankers in the Gulf of Oman, near the vital Strait of Hormuz.

Pushing back pressure on Tehran, whom the US and the UK accuse of the explosions damaging the Japanese-owned Kokuka Courageous and Norwegian-owned Front Altair, Larijani said at a Parliamentary session on Sunday:

Suspicious acts in the Sea of Oman against oil tankers…seem to be supplementary to the [US] economic sanctions as the Americans went nowhere with the sanctions, especially, given America’s historical record in the area [of false flag operations].

Soon after the explosions, which disabled both ships with the injury of one sailor and the evacuation of 43 others, US Secretary of State Mike Pompeo said Iran was responsible. The US military released a video showing a Revolutionary Guards boat alongside the stricken Kokuka Courageous, removing what may have been an unexploded limpet mine.

The Iranians have disputed the video establishes Tehran’s role in an attack. Larijani mocked remarks by Pompeo, who urged Iran to “meet diplomacy with diplomacy, not with terror, bloodshed, and extortion”, by citing the US withdrawal in May 2018 from the 2015 nuclear agreement and Washington’s comprehensive sanctions on Iran from November:

Is it diplomacy to start a face-off with a revolutionary nation with acts of economic terrorism, which they themselves call the toughest ever?

Is it diplomacy, Mr. Pompeo, to renege on one’s promises in the nuclear agreement?

Iranian State media also headline the doubts of Japanese officials over the US claims.

According to Japan’s Kyodo news agency, the officials say Tokyo has called for further examination by the Americans, including in a Friday phone conversation between Foreign Minister Taro Kono and Pompeo.

One said the US claims so far were “nothing beyond speculation”.

While Britain has backed the Trump Administration, other European states such as Germany have been cautious, saying no responsibility has been established and calling for a de-escalation of tension.

Iranian officials accuse the US, Saudi Arabia, and the UAE of carrying out “false flag” operations as a pretext for tougher sanctions and possibly military confrontation with the Islamic Republic.

About a sixth of the world’s oil passes through the Strait of Hormuz.

In a Sunday interview, Pompeo reiterated the Administration’s claims but tried to assure,
“President Trump has done everything he can to avoid war. We don’t want war.”

The Secretary of State said intelligence officials have “lots of data, lots of evidence” tying Iran to the attacks, but gave no details.

And pointing beyond his emphasis on diplomacy, he indicated that military measures — such as a reported Pentagon plan for deployment of more US forces and escorts of tankers — might be taken to guarantee navigation.

“The United States is going make sure that we take all the actions necessary, diplomatic and otherwise that achieve that outcome,” he said.