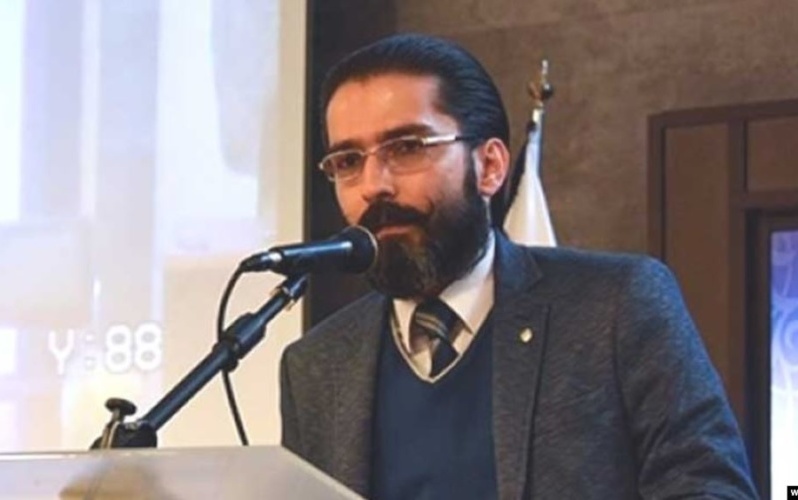 Amirsalar Davoudi (pictured) is the latest lawyer in Iran given a lengthy prison sentence, as the regime continues its pressure on attorneys not to represent activists and other political prisoners.

Davoudi’s wife Tannaz Kolahchian tweeted last week that Davoudi has been sentenced to 30 years in prison over his social media posts. He must serve at least half the term.

The lawyer, who was arrested in November 2018, was convicted of “collaborating with an enemy state through interviews”, “propaganda against the state”, “insulting officials”, and “forming a group to overthrow the state.”

The latter charge refers to Davoudi’s posts on the “Without Retouch” Telegram messaging application, where he expressed views about political and social affairs and civil rights issues.

Exiled Iranian lawyers signed an open letter denouncing the “outrageous ruling that completely derides all principles of the legal counsel”, calling Davoudi “one of the most honorable lawyers across Iran”.

He has been convicted merely for defending victims of the judiciary and security agents, political prisoners and the oppressed, as well as audaciously criticizing the corrupt, cruel and inefficient political and judicial system in Iran.

Kolahchian said her husband has “decided not to object to the verdict”.

Sotoudeh was a political prisoner from 2010 to 2013 because of her defense of those who protested the disputed 2009 Presidential election. She was rearrested in June 2018, after she insisted on defending women who publicly took off their hijabs and waved them on the end of poles.

In March, the attorney — a recipient of multiple international awards for her defense of human rights — was given a 26-year sentence.

Another lawyer, Mohammad Najafi, is serving a three-year prison sentence and facing a total of 19 years in prison.

At least eight attorneys have been arrested since September 2018 over their defense of political prisoners or comments on cases and issues in Iran.

Ghasem Sholeh-Saadi, a former MP, and Arash Keikhosravi were given six-year sentences in December for taking part in an “illegal gathering” and “propaganda” against the ruling system.

Other lawyers who have been arrested or face prosecution since January 2018 include Farokh Forouzan, Mostafa Daneshjoo, Mostafa Tork Hamadani, Payam Derafshan, and Zeynab Taheri.

Since late 2017, detainees held on national security-related charges have been instructed to choose their counsel from a list approved by Iran’s Chief Justice.

In May 2019, Parliament’s Judicial and Legal Affairs Committee approved a proposal that would allow the detainees to choose their own lawyers. However, the measure allows authorities to deny access to counsel for at least 20 days during an initial “investigation” stage.