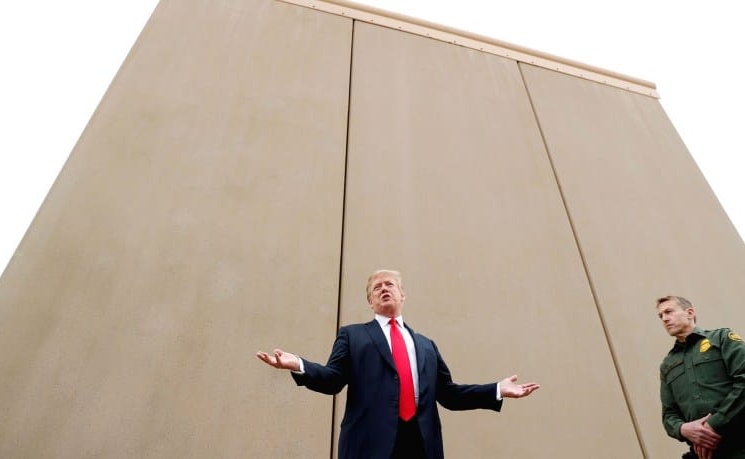 Donald Trump on a tour of US-Mexico border wall prototypes near the Otay Mesa Port of Entry in San Diego, California, March 13, 2018

A federal judge blocks construction of Donald Trump’s Wall with Mexico, ruling that Trump cannot use a “national emergency” to take money from Government agencies for the 30-foot-high barrier.

Judge Haywood Gilliam of the US District Court for Northern California ruled that the diversion of the money, largely from the US military, likely oversteps a President’s statutory authority. The injunction specifically limits wall construction projects in El Paso, Texas, and Yuma, Arizona.

Gilliam quoted Mick Mulvaney, the acting White House chief of staff, who said in a TV interview the Wall “is going to get built, with or without Congress”. The judge said Presidential action “without Congress”, when legislators refuse a funding request from the White House, “does not square with fundamental separation of powers principles dating back to the earliest days of our Republic”.

Congress refused to allocate $5.7 billion money for the Wall, estimated to cost at least $25 billion if built across the length of the US-Mexico border, and instead approved $1.4 billion for enhanced border fencing. Legislators held out even when Trump shut down the Federal Government for 35 days, a record length, in December and January.

Trump then declared the “national emergency” on February 15. More than $6 billion for The Wall is to be taken from military counter-narcotics programs and construction projects, including of base facilities for personnel

Gilliam is hearing two cases: one filed by the State of California in conjunction with 19 other states, and a second from the American Civil Liberties Union on behalf of the Sierra Club and the Southern Border Communities Coalition.

Dror Ladin, an attorney for the ACLU, summarized:

Our lawsuit seeks to stop the president’s illegal power grab before it causes irreversible harm to border communities and the rule of law.

The case is not about whether the challenged border barrier construction plan is wise or unwise. It is not about whether the plan is the right or wrong policy response to existing conditions at the southern border of the United States,” Judge Gilliam said in the order. “Instead, this case presents strict legal questions regarding whether the proposed plan for funding border barrier construction exceeds the Executive Branch’s lawful authority.