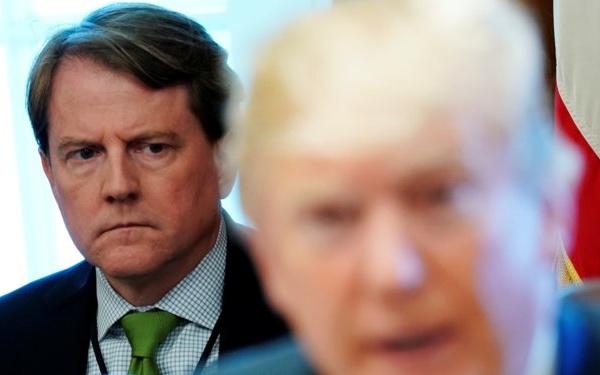 White House officials asked McGahn at least twice in the past month to make a public statement clearing Trump, according to “two people briefed on the requests”.

McGahn is a central figure in two of the eight cases of obstruction or attempted obstruction by Trump that are detailed in the 448-page Mueller Report.

In early 2018, after stories broke about the incident, Trump instructed McGahn to deny any attempt to remove Mueller.

The report’s account is based in part on 30 hours of interviews of McGahn by Mueller’s team.

Before the public release of the report, but after the Justice Department gave a copy to Trump’s lawyers, the White House approached McGahn’s attorney William A. Burck, Trump’s lawyers maintained that Mueller left out McGahn’s statement that he believed Trump never obstructed justice.

But McGahn, who left the White House in October, declined to issue a statement supporting Trump after the report was released on April 18.

Before and after the publication of the Mueller Report, the White House has pursued an all-out effort to bury its findings and prevent further examination.

Attorney General William Barr tried to spin the report in Trump’s favor, to the point of misrepresenting that it found “no collusion” and quashing any follow-up over obstruction of justice. The attempt frustrated Mueller and his team, with the Special Counsel writing Barr in late March about the damaging effect of misinterpretation.

Barr has refused to testify before the Democrat-controlled House Judiciary Committee and to give legislators unredacted copies of the report, bringing a contempt of Congress charge by the Committee on Thursday.

The White House has asked McGahn not to comply with any subpoena to testify, and Trump said on Thursday that he will assert executive privilege to block any handover of the unredacted report.

The effort has extended to Trump’s tax returns and finances. Treasury Secretary Steven Mnuchin has rejected a House Ways and Means Committee request that the Internal Revenue Service provide Trump’s tax returns from 2012 to 2018, and Trump’s lawyers have filed in court to prevent his accountants from complying with a House Oversight Committee subpoena for six years of financial statements.

Trump’s long-time lawyer and fixer Michael Cohen has testified that Trump gave false information about his wealth to mislead tax and insurance officials.

Judiciary Committee chairman Jerrold Nadler said testimony is being sought from Mueller, but a date has not been agreed.

Trump’s camp are reportedly trying to prevent a Mueller appearance by claiming that he is still a Justice Department employee, putting him under executive privilege.