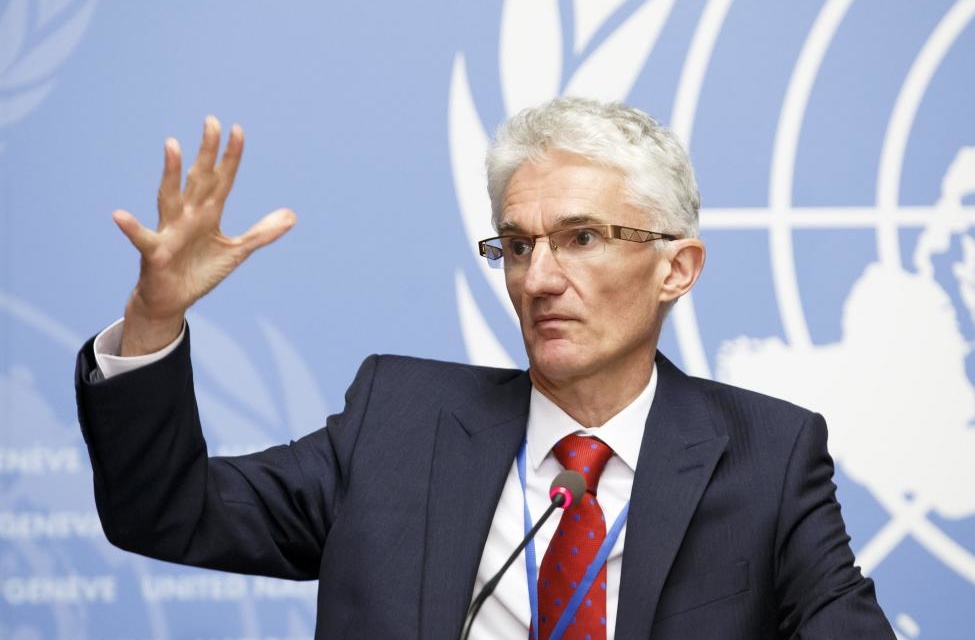 The UN is planning to move all oversight of aid operations to Syria’s capital Damascus, despite the Assad regime’s sieges, persistent denial of assistance, and attacks on civilians in opposition areas.

The plans were announced in a closed-door meeting in early April by Mark Lowcock, the UN Undersecretary-General who heads the Office for Coordination of Humanitarian Affairs.

UN staff, aid workers, and activists reacted with concern. A dozen aid workers, officials, and analysts told the New Humanitarian that the effect would be to undermine cross-border aid deliveries from Iraq, Turkey, and Jordan.

Since early 2015, aid operations have been run both from Damascus and in Jordan’s capital of Amman. Officials in both locations are granted equal decision-making authority.

The “Whole Syria” approach has attempted to ensure deliveries to opposition as well as regime areas. Despite the Assad regime’s takeover — enabled by Russia, Iran, Hezbollah, and other foreign militias — of opposition territory since 2016, an estimated 4.5 million of about 17 million people still living in Syria are outside the regime’s control.

The New Humanitarian’s sources said removal of the Amman position would threaten any further operations seeking to assist opposition areas, despite authorization by the UN Security Council. A senior aid worker who operates in opposition territory said Syrian NGOs “feel we have been betrayed by the international community”.

In an April 15 letter, dozens of Syrian and international NGOs that work in Syria expressed “serious concern” that ending the Whole of Syria approach could “have adverse consequences for millions of Syrians in need”.

The Syrian American Council, based in Washington, explained on Friday:

The development would mean all aid collected for Syria through donor nations would be centralized in, and delivered through regime-controlled Damascus. This not only undermines the UN’s mission to deliver aid to all areas of the country, but specifically its efforts to get aid to areas outside of the regime control.

To reoccupy opposition areas, Russia and the Assad regime have imposed destructive sieges and blocked any assistance. The tactics were used from autumn 2015 to bring the capitulation of Damascus suburbs throughout 2016 and 2017, east Aleppo city in December 2016, the East Ghouta area near Damascus in April 2018, and the rest of opposition-held southern Syria by summer 2018.

Russia and the Assad regime have bombed vital facilities such as medical facilities and civil defense centers to complement the sieges by breaking civilian will to resist. They are even accused of the bombing of a UN aid convoy in September 2016 to ensure no assistance reached east Aleppo city.

Even before the tightening of the sieges, 88% of food aid distributed in Syria went to regime territory, according to an April 2016 survey. The Syrian Foreign Ministry commmanded the UN to work only with an “approved list” of organizations, with all humanitarian agencies required to sign an agreement with the official Syrian Arab Red Crescent.

Deprived of food and medicines, hundreds of civilians died from starvation and lack of medical care, often a prelude to pro-Assad offensives that then killed many thousands before opposition surrenders.

The tactics are still being used, notably in an effort to force about 40,000 displaced people in the Rukban camp, in southeast Syria, to return to their home areas.

An OCHA spokesperson said the UN was reviewing its operations to ensure life-saving assistance is “principled, timely, and effective”. The OCHA was committed to “maintain strong and distinct leadership” for cross-border operations, but was carrying out the review by consulting a “wide range of stakeholders”.

The spokesperson did not say if the decision to shift to Damascus was final. Lowcock was unavailable for comment.

Eleven donor states, including the US and the UK, objected in an April 16 letter: “Syrian authorities have demonstrated that they will not permit unfettered flows of assistance into areas outside their control.”

The UN also has an office in Gazientep, Turkey for aid distribution, but its head is subordinate to the Amman coordinator who would be removed under the OCHA plan.

After the April 15 and 16 letters from NGOs and donors, OCHA head Lowcock’s office said they were carrying out a “light review” of operations.

But that is unlikely to reassure senior aid workers. One of them explained that “there is no trust” with Damascus:

[Assad] did not win yet, but [this] is helping him to finalize [victory]. It is changing the system to support him. That is how we look at it.