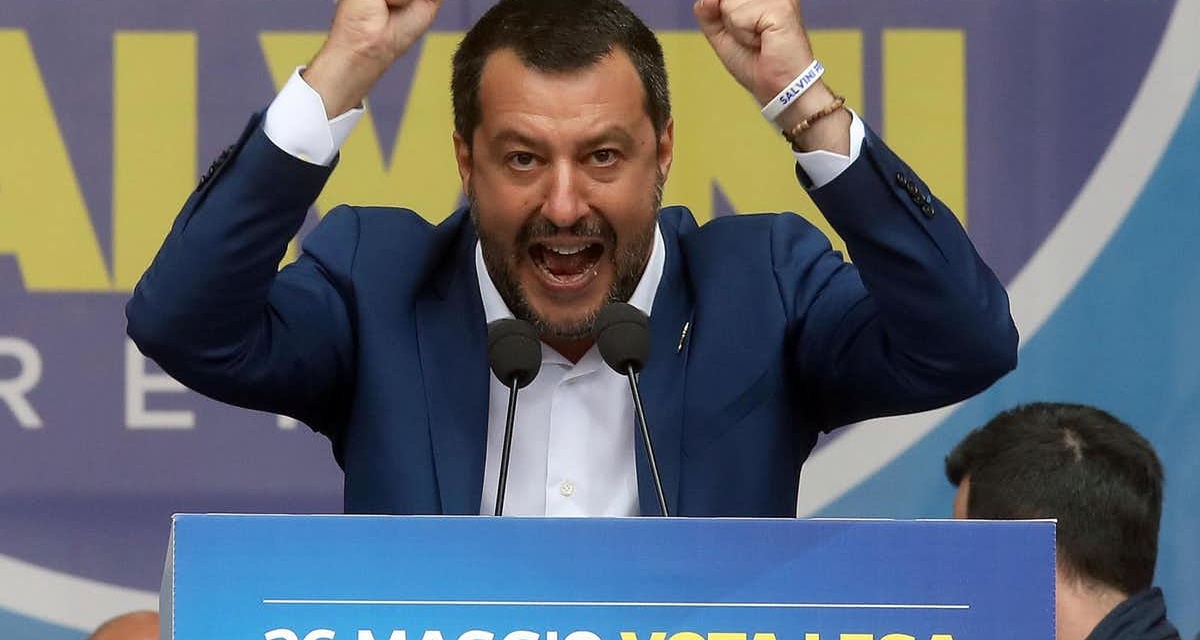 Deputy Prime Minister and League leader Matteo Salvini at a rally in Milan, Italy, May 19, 2019

Since Matteo Salvini, Italy’s Deputy Prime Minister, Interior Minister and leader of the League, announced in April 2019 his intention to create a new continent-wide eurosceptic group in the European Parliament – the European Alliance for Peoples and Nations – there has been much speculation about what it may do following the European elections. But the fact that Marine Le Pen’s National Rally from France, Geert Wilders’ Party of Freedom from the Netherlands, the Belgian Vlaams Belang, the Danish People’s Party and others have all agreed to join suggests that Salvini is now recognized as a successful leader well beyond Italy’s borders.

It’s interesting to reflect on why Salvini is bothering at all. After all, his main focus since becoming the League’s leader in 2013 has been on domestic politics. But he is ultimately eyeing the Italian premiership, so it matters if he is acknowledged as someone who is able to set the agenda in Europe. The fact that Salvini headlined a eurosceptic protest in Milan on May 18, which was also attended by several populist, radical right leaders from across Europe – including Le Pen and Wilders – is further evidence of this.

But bad news has been piling up on Salvini and his party in recent weeks – and while the League is still expected to do extremely well in the forthcoming European elections, its final tally is likely to be lower than predicted only a month ago.

In April, the League was expected to win 37% of the Italian vote, but support for the party has been shrinking in recent weeks. It has now dropped to around 30%, according to some polls. Nevertheless, after securing just 6.2% in the last European election, that would still be an extremely strong performance by the League.

If the final tally ends up coming in under 30%, you can expect most Italian commentators to focus on the party hemorrhaging support in the run-up to the election – rather than the number of additional seats it would have captured.

Salvini’s personal approval rating has also dropped by 7% (from 59% to 52%) in the last two months, and opposition to his policies and persona has become more vocal across Italy. In the meantime, the League’s partner in government, the Five Star Movement (M5S), and the opposition Democratic Party, have both regained ground.

The forced departure from government of the League’s undersecretary for transport, Armando Siri, as he faces an investigation into alleged corruption, has taken a toll, too. M5S used to let Salvini dominate the agenda, but is now asserting itself as the dominant coalition partner, and very much lobbied the prime minister, Giuseppe Conte to get rid of Siri.

Indeed, if the League’s result in the European elections suggests to Salvini that the party’s star is waning, he may be tempted to cut his losses and put an end to the coalition government. What would follow such a move, however, is highly uncertain.

The autumn budget would be the perfect opportunity for Salvini to take radical action. Because of agreements successive Italian executives have made with the European Commission to keep the country’s deficit under control, the League and M5S will need to find savings of about €23 billion – or else raise VAT.

Salvini and M5S leader, Luigi Di Maio, have repeated many times that they have no intention of approving such a hike, aware that it would impact negatively on the economy, and obviously be noticed by consumers. Given the sluggish economy in recent months, however, it is unclear how the government can avoid it.

Salvini has so far refrained from cashing in on the considerable popularity he has enjoyed since becoming interior minister about a year ago, to try and force fresh elections. But the combination of shrinking support for the League and having to deliver unpopular financial measures could tilt the balance in favor of such a move. It would also allow Salvini to avoid taking responsibility for a budget “written by Brussels”.

But if he wants to dissolve the government and hold another election, Salvini’s narrative will need to change fast – so far, he has sold himself as a force for stability, an image out of step with forcing Italy to the polls yet again.

Then there is the question of whether fresh elections could even be held as quickly as Salvini would like. After all, the executive could simply end up being replaced by another, supported by a different governing majority, as, if this government collapses, parliamentary arithmetic means that no single party, or leader, would be in control of what happens next.

If M5S gives the League a good reason to take the plunge – and particularly if the League can credibly frame its coalition partner as wishing to comply with the EU’s fiscal requirements and standing in the way of further tax cuts – then the game may be on.

But these are big ifs. If Salvini decides to act, expect his narrative to change rapidly over coming months and, providing he has his way, new elections in spring 2020. The bottom line is that Salvini’s next big moves could be brought about by the League’s problems, rather than its successes.