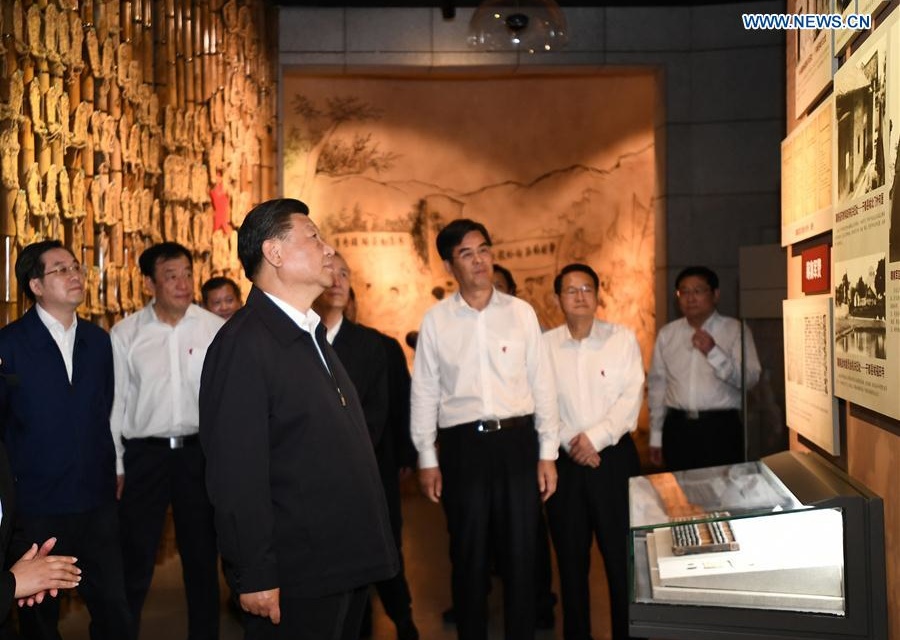 Donald Trump has declared he is ready for a “BIG TARIFFS” trade war with China, despite his top economic advisors as well as US manufacturers and farmers talking about the likely damage.

And Beijing just signaled that it is preparing for the battle.

On Monday, President Xi Jinping called for the Chinese people to begin a modern version of the 4,000-mile year-long “Long March”, led by Mao Zedong in 1934 as the Chinese Communist movement resisted the Nationalist government.

Speaking at the site of the start of the Long March in Jiangxi Province, Xi told a cheering crowd, “Now there is a new long march, and we should make a new start.”

Xi did not mention the trade war directly, but the visit — broadcast on State TV — comes after Trump’s escalation of tariffs on $200 billion of Chinese imports and Administration measures against Huawei, the world’s second-largest manufacturer of smartphones. And Liu He, Xi’s chief economic advisor and top trade negotiator, was alongside the President.

Talks between the US and China broke down in Washington on May 9, the same day Trump raised the tariff level from 10% to 25% and threatened to impose duties on the other $350 billion of Chinese imports.

On Wednesday, Xi told an audience in Jiangxi that the country “must be conscious of the long-term and complex nature of various unfavorable factors at home and abroad, and properly prepare for the various difficult situations”.

Yesterday the Trump Administration said it may place China’s Hikvision, a manufacturer of surveillance equipment, as well as Huawei on a list restricting access to American technology such as chips and software. Lu Kang, a spokesman for the Chinese Foreign Ministry, said, “China opposes the U.S. practice of abusing state power and arbitrarily discrediting and suppressing foreign enterprises, including Chinese enterprises.”

A potential Chinese response was signaled by Xi’s Monday visit to a rare earths mine in the city of Ganzhou. China is the largest source of rare earths, used in many electronics.

In 2010 Beijing halted all exports to Japan, including rare earths, for two months over a territorial dispute.

Xi called on industry to “intensify efforts” to develop the “strategic resource” of rare earths. Officials said the visit was routine, but Chinese state media stepped nationalist rhetoric and compared the trade war to the Korean War: national movie channel CCTV-6, ran back-to-back films about the 1950-1953 conflict, saying that the footage was “echoing present times”.

Xi’s Government is likely preparing for inflationary effects of the tension with Trump. In April, the price of pork rose 14%, and the broader food consumer price index surged 6.1%. The average price of a basket of fruit reache$1.10 per kilogram, its highest level in almost five years.

#FruitFreedom became a top trending topic on Weibo, China’s most popular social media site, as the National Bureau of Statistics blamed the weather and said, “The price increase of fresh fruits will not continue to be high.”