Syria Daily: Turkey & US Spar Over Fate of North 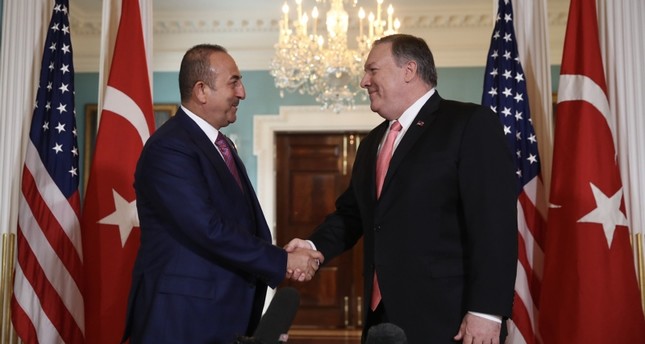 Turkey and the US have sparred over the fate of a northern Syria amid the de facto partition of the country.

US Secretary of State Mike Pompeo warned Ankara that Turkish military action would have “potentially devastating” consequences, soon after Turkish Foreign Minister Mevlüt Çavusoğlu — in Washington for the 70th-anniversary NATO summit — criticized the Americans for a lack of strategy.

A State Department said Pompeo “expressed support for ongoing negotiations regarding northeast Syria”, where US-supported Kurdish groups control about 27% of the country.

But his warning highlighted the dispute fed by Turkey’s consideration of the Kurdish militia YPG — the leading faction in the US-backed Syrian Democratic Forces which removed the Islamic State from the area — as “terrorists”, and Donald Trump’s order in December for all 2,000 US military personnel to leave Syria.

Although the Pentagon have pushed back against Trump’s command, extending the timeline and arranging for up to 1,000 troops to remain, the uncertainty has fed both Turkish concern and President Recep Tayyip Erdoğan’s sense of opportunity to extend influence over the north.

Erdoğan has called for a 32-km (20-mile) deep “safe zone” along the Turkish-Syrian border, across the Kurdish cantons of Kobani and Cezire. He has declared that Turkey may carry out military action both west of the Euphrates, including on the city of Manbij, and east of the river.

Turkey intervened in August 2016 alongside Syrian rebels in northwest Syria. In early 2018, a Turkish-rebel offensive captured much of the Afrin canton, including all Kurdish-controlled cities.

In January, Erdoğan refused to meet National Security Advisor John Bolton, a leading proponent of an ongoing US presence in Syria. Bolton and Pompeo had warned Ankara not to attack Kurdish areas in the event of an American withdrawal.

Foreign Minister Çavusoğlu chided the Trump Administration at a panel organized by the NATO-linked Atlantic Council:

Different positions, different statements are coming from institutions and departments here in the United States. State Department and Defense Ministry, as well as the military on the ground, CENTCOM [US Central Command], and this and that. All different positions.

There is no clear strategy, this is the problem.

Tension has been compounded by US opposition to Turkey’s purchase of Russian S-400 anti-aircraft missile defense systems. Washington has suspended support of Ankara’s US-supplied F-35 warplanes, and Vice President Mike Pence said on Wednesday that the issue threatened the US-Turkish relationship.

The purchase from Russia is a done deal.

The Foreign Minister’s interview with the US Public Broadcasting Service’s Newshour: