“Is It Coz I Is White?” — Let’s Be Honest about Race and Brexit 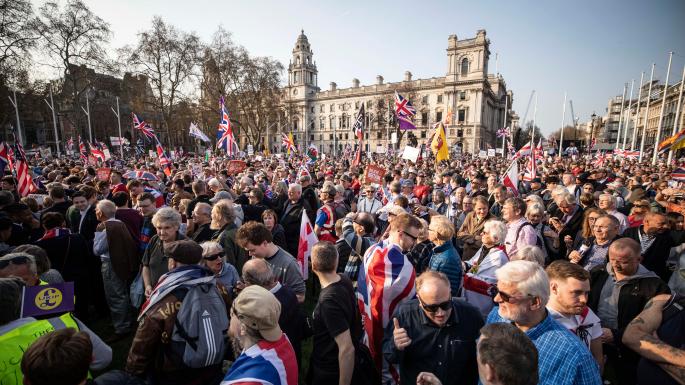 “It’s been the most extraordinary day….A day which has seen…I have never seen so many white people in one place; it’s an extraordinary story.”

That was the summary of Jon Snow, the veteran anchor of Britain’s Channel 4 News, as he watched pro-Brexit protesters — some of them from far-right groups — in central London on Friday.

More than 2,000 angry viewers contacted Ofcom, the broadcasting regulator. A social media backlash called Snow, expelled from the University of Liverpool in 1970 for his involvement in anti-apartheid protests, a “racist”. Hard-right politician Nigel Farage, whose own comments have been criticized for stoking racism, tweeted, “We are all sick to death of Jon Snow’s blatant bias, condescension, and fake news.”

The furor brought a statement from Channel 4:

This was an unscripted observation at the very end of a long week of fast-moving Brexit developments.

Jon has covered major events such as this over a long career and this was a spontaneous comment reflecting his observation that, in a London demonstration of that size, ethnic minorities seemed to be significantly under-represented.

But what was wrong with Snow’s remark?

Last Friday, on the original date for the UK’s Brexit departure from the European Union, there were three separate pro-Brexit rallies close to each other in London. The March to Leave, which began in Sunderland in northeast England two weeks ago, arrived in Parliament Square on Friday afternoon. A Make Brexit Happen rally, organized by the UK Independence Party, was nearby. A third rally was backed by far-right activist Tommy Robinson, who spoke to crowds along with UKIP leader Gerard Batten.

Unlike the People’s Vote rally, held on the previous Saturday, these rallies had only a fraction of marchers, were less diverse, and were far angrier.

Snow’s factual observation offended some people who refused to accept that the Brexit is mainly a white affair. In the 2016 referendum, 46% of white British people voted to remain while 54% wanted to leave. Among ethnic minorities, the margin for Remain was 69-31.

Throughout the campaign, there were a few non-white British activists who were vocal about leaving the EU. But in recent months, organizations like the Bangladeshi Caterers Association have expressed regret for support of Brexit, saying they believed the lies they were told about immigration — such as the promise of leading EU Leavers such as Priti Patel and Boris Johnson that immigration rules would be relaxed to permit more chefs from south Asia. Oli Khan, the Secretary-General Association wrote:

The Brexit being proposed will damage our businesses and make our communities poorer. Nor will leaving the EU provide any clarity or closure: the only guarantee is that successive governments will go back and forth to Brussels trying to make sense of something that makes no sense for Britain.

White Forced to Apologize to Whites Over Comments About Whites

We are now in a world where a white man is forced to apologize to other white people for comments about white people. As a journalist, Snow explained what he saw on the lawns of Parliament, yet he was reprimanded for using race as a precursor to define the group of people who were present, united in belief and united in skin color.

Would the same people who accused Snow of using race be so vocal if a news presenter at a demonstration organised by Muslims on Islamophobia said, “It’s been the most extraordinary day….A day which has seen….I have never seen so many Muslims in one place; it’s an extraordinary story”? What would have been the reaction if a news presenter observed: “There was a huge turnout of so many British Jews showing their disgust against anti-Semitism, this was a totally Jewish affair.”

If the likes of Farage and his friends wish to be consistent in calling out subtle racism, where were they when Catherine Blaiklock, a former UKIP member, said black men are violent due to high testosterone? Where was the condemnation when Conservative MP Jacob Rees-Mogg retweeted a post from from Alice Weidel, the co-leader of the far-right Alternative for Germany (AfD) Party, whose members have claimed, “Muslims in Europe are seeking to kill all Germans”?

A Cynical Use of Race

The orchestrated attack on Snow was not a heartfelt call to examine our attitudes, latent and overt, on race. Instead, this was political exploitation, both for Brexit and to push back scrutiny of economic and social issues.

And so again the specter of “political correctness” was invoked to turn the white majority — which supposedly triumphed with the 52-48 result in the 2016 referendum — into victims. Brendan O’Neill wrote in the Spectator:

Snow pointed to the racial make-up [of pro-Brexit rallies] for the same reason people throughout history have tended to comment on people’s racial make-up — to reduce them, however unwittingly, to an indistinguishable and at some level problematic throng of people.

And so the targeting of Snow deflected from what happened during the three gatherings in London. Five protestors were arrested, including one man on suspicion of assaulting a police officer and two others on suspicion of assault. Journalists and camera crews were harassed. MPs such as Lisa Nandy were confronted by Brexit supporters. She wrote:

Today outside Parliament I and others were accosted by people shouting f****** traitor as we tried to get in to vote. Our staff were advised to leave the building for their own safety. There were armed police everywhere. This is not normal.

Joanna Cherry, a Scottish Nationalist Party MP, said she was “abused by trailing ends” of the Leave means Leave protest, called a “traitor” and “told to go back to my own country”.

Videos showed a woman claiming the “EU was at the heart of a child rape conspiracy” and protesters burning the EU flag, threatening to burn down Parliament after Farage called it “enemy territory”. Effigies of Prime Minister Theresa May and Mayor of London Sadiq Khan, ropes around their necks, were dragged down Whitehall.

These brought no reported complaints to Ofcom.

Channel 4 were put in a difficult position by the response to Snow. But their apology validates the rhetoric of both the hard-right Brexit-ers and those who wish to bury discussion of race. It feeds the normalisation of a racist culture — a minority culture, but one with virulent and damaging effects.

It is easy to ask, “Is it cuz I is white?” to deflect from the real problems the UK is facing. But, whatever balm it gives the accusers, it leaves the rest of us not only with those problems but facing the hate which is being whipped up in the name of a false victimhood.