Iran Daily: Soleimani to the Rescue in the Floods 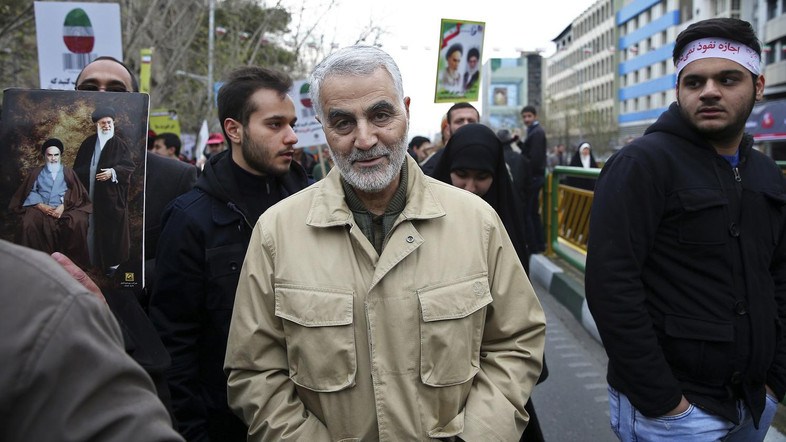 Gen. Qassem Soleimani, head of the Quds Force of Iran’s Revolutionary Guards, at a rally in Tehran, February 11, 2016 (Ebrahim Noroozi/AP)

Facing widespread criticism over its response to destructive floods, Iran’s regime has deployed high-profile General Soleimani for a month to west of the country.

The Iranian Students News Agency said Friday that Soleimani, the head of the Revolutionary Guards’ elite Qods Force, will contribute to the recovery effort in Lorestan and Khuzestan Provinces. It published his message that the flooding, which has killed at least 70 people, is a “hard divine test”.

The Revolutionary Guards as well as the Rouhani Government have been challenged for a slow and ineffective response to the flooding, which began in northern Iran after heavy rains more than two weeks and then spread across central and western Iran.

But Soleimani praised the armed forces for doing their duty “at the order of the Islamic Revolution’s leader Imam Khamenei”.

Soleimani is among the best-known regime figures, exalted for his role in Iranian interventions in Syria’s civil war and the fight against the Islamic State in Iraq. He is touted by some observers as the Supreme Leader’s favoredccandidate in the 2021 Presidential election.

Soleimani is among the best-known regime figures, exalted for his role in Iranian interventions in Syria’s civil war and the fight against the Islamic State in Iraq. He is touted by some observers as the Supreme Leader’s favored candidate in the 2021 Presidential election.

The surging waters have damaged more than 60,000 homes, destroying 25,000 of them. At least 86,000 people have been moved to emergency shelters.

The worst of the flooding is now in Lorestan and Khuzestan Provinces in western Iran. Villages have been submerged, and the town of Pol-e-Dokhtar was cut off earlier this week.

Six more towns and villages in Khuzestan were evacuated on Saturday, bringing the total to 17, with residents taken to shelters including three army barracks.

President Hassan Rouhani and the Revolutionary Guards have quarrelled over the response. Rouhani has criticized the Guards’ demolition of a railway in northern Iran as ineffective, while Guards commanders assert “there is no management” in rescue and aid operations and “no government official would dare” show up because of residents’ anger.

The Supreme Leader told an audience on Wednesday, “I have stressed to the officials that the main step of reconstruction and compensation comes next and that these losses must be wholly compensated.”

Supporting that injunction, Soleimani said he and other ilitary commanders and veterans will set up relief stations “until the situation returns to normal”.

His deployment comes after other Revolutionary Guards PR attempts to show their leadership in combatting the floods. Guards commander-in-chief Maj. Gen. Mohammad Ali Jafari has been filmed shovelling sand into sandbags, while former commander Mohsen Rezaei has been on a walking tour amidst ruined homes.