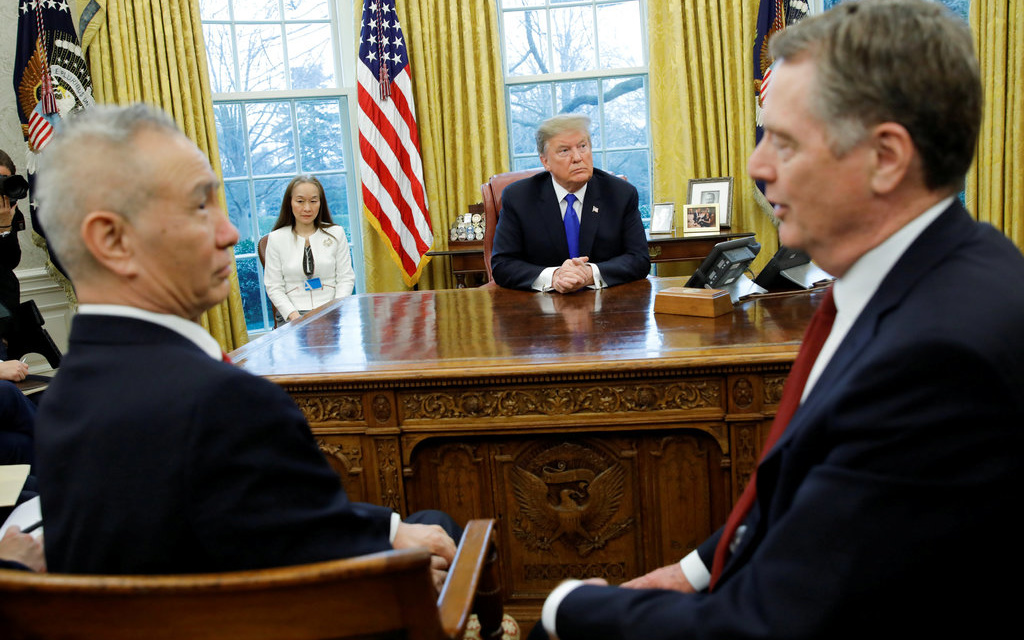 Donald Trump looks on during a meeting with Chinese Vice Premier Liu He and US Trade Representative Robert Lighthizer in the Oval Office, February 2019 (Carlos Barria/Reuters)

Shattering Donald Trump’s declared goal of eliminating the trade deficit, the gap has soared to a record $891.3 billion in goods.

Unprecedented US imports — including from China, despite Trump’s trade war — fuelled the deficit. There were causes such as weakened overseas demand for American goods becase of the global economic slowdown and the relative strength of the US dollar. But Trump’s $1.5 trillion tax cut, largely financed by government borrowing, made a significant contribution.

Economists had warned that the tax reductions would feed the deficit, and Trump’s trade war added to reduced American exports as the Chinese economy slowed. The sale of US products to Beijing declined 50% in December, compared to December 2017.

When services are included, the trade deficit rose 12.5% in 2018 to $621 billion. In December, the deficit increased 19% from the previous month, to $59.8 billion. The deficit was the highest monthly total since 2008 and a US economy in recession.

The American deficit with the European Union and Mexico rose more than 10% in 2018, as US exports slowed. Meanwhile, Trump’s promise to use tariffs to balance accounts with China faced a $419 billion trade gap in goods.

With Trump’s tax cuts taking full effect, Federal Reserve officials and some economists are warning that record-setting federal borrowing could drag down the US economy. They point to interest on the debt, taking money from programs like Medicare and Social Security.

Federal Reserve chairman Jerome Powell said at a House hearing last week that the federal debt is on an “unsustainable” path.

Asked if he would also say that the trade deficit was unsustainable, Powell was reserved, “I don’t think I would say that.”